OCI: no curb on co-operating with Olympic tickets inquiry

Members must treat information on other personnel as ‘strictly confidential’ 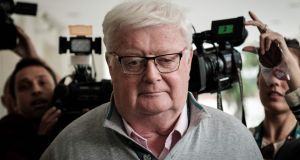 The secretary general of the Olympic Council of Ireland (OCI), Dermot Henihan, arrives at a police station to be questioned over matters of Olympics ticketing in Rio de Janeiro, Brazil, on August 23rd, 2016. Photograph: Yasuyoshi Chiba/AFP/Getty Images

The Olympic Council of Ireland (OCI) has said it has legal advice that there is no impediment to it co-operating fully with the Government’s non-statutory inquiry into allegations of ticket touting at the Olympics.

The organisation’s articles of association say members have to treat all information relating to other members and the executive committee as “strictly confidential and shall not communicate such information or any part thereof to any other person, authority or organisation, whatsoever”. Speaking on RTÉ Radio yesterday, leader of the Labour Party Brendan Howlin said the OCI was “debarred” by law from co-operating with any inquiry unless it was statutory based.

However, a spokeswoman for the council said it had received legal advice that there was nothing prohibiting members from fully co-operating, and that it fully intends to co-operate. The articles of association of the OCI say its purpose is the “complete independent control” of all matters relating to the Olympic movement, and to ensure that the council remains “a completely autonomous and independent body and resists all political, religious or commercial pressures.”

The constitution also stipulates that no member of the executive committee is to be appointed to any salaried position.