NUIG Siptu members to vote on equality audit of posts 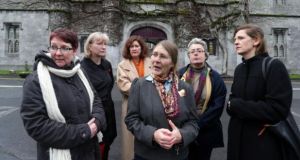 NUIG has “unreservedly accepted” the ruling of the Equality Tribunal which found Dr Micheline Sheehy Skeffington (centre) had been discriminated against in her application for a senior lecturership in 2009. Photograph: Joe O’Shaughnessy

About 230 academics who are members of the union will be asked to vote at an “emergency” meeting early January on a motion calling for a “comprehensive” audit throughout the college.

The move follows the recent Equality Tribunal decision in favour of Dr Micheline Sheehy Skeffington, which found she had been discriminated against in her application for a senior lecturership in 2009.

The union says it has also “noted” the results of a recent Higher Education Authority survey on gender balance in the third level sector, which found that the gender divide is most pronounced in NUIG, where almost four in every five (79 per cent) senior academic staff members are male.

The university has “unreservedly accepted” the ruling of the Equality Tribunal, and has promised several initiatives, including establishment of a task force to review practices on gender equality.

However, Siptu organiser Noel Maguire said that if the university had taken the issue seriously, it would have ensured gender equality in the most recent promotion round in 2013/2014.

Five female academics who were turned down by NUIG for senior lecturer posts in 2009, and again recently, have been taking legal advice.

Dr Sheehy Skeffington has offered to use her 70,000 euro award from her proceedings to help them fight their case.

She has also refused to participate in the college’s task force unless three demands are met, including promotion of the five academics.

Mr Maguire said that there had been no invitation from NUIG to date for Siptu to participate in its task force.

The union, which has set January 8th as date for the vote, has urged NUIG’s governing body to “engage fully and openly with all relevant NUIG stakeholders and its alumni” to ensure that “this unacceptable state of affairs is rectified within an acceptable timeframe”.