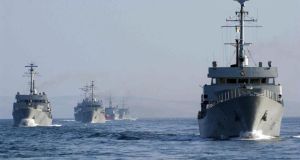 The Irish Naval Service is set to welcome its latest recruit when the €50 million offshore patrol vessel, LE Samuel Beckett, sails into Cork Harbour tomorrow morning to join the fleet at the Haulbowline Naval Base.

The ship, built by Babcock Marine at Appledore in Devon, has been undergoing sea trials for the past few months but tonight the Naval Service took ownership of the vessel and its captain, Lt Cmdr Ken Minihane and his crew of 45, headed for Cork.

The ship will spend about a week at Haulbowline being fitted out with a number of armaments before sailing for Dublin, where a special commissioning ceremony is due to take place beside the Samuel Beckett Bridge on May 17th.

The new 90m ship, which is similar to but 10m longer than the LE Roisin and the LE Niamh, which were also built at Appledore, is designed to carry a crew of 45 with space for up to 10 trainees. It has a top speed of 23 knots.

Last year, Minister for Defence Alan Shatter told the Dáil the vessel would be named the LE Samuel Beckett in honour of the Nobel-Prize winning Irish writer and would later be joined by a second vessel named the LE James Joyce.

Work started on the ship in May 2012 and was completed last November when it was launched at the Babcock Marine yard at Appledore in the Torridge Estuary in North Devon, amid much celebrations.

About 100 people gathered to watch the launch and the vessel was played out into the estuary by the Appledore Town Band, which performed Amhrán na bhFiann - to much cheering and delight.