Projected €2.4bn overrun to be written off against profits - with taxpayer loss of €600m 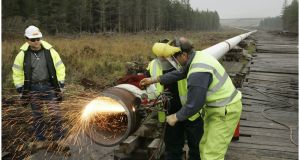 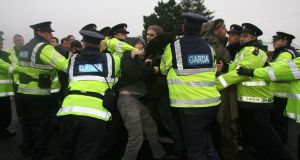 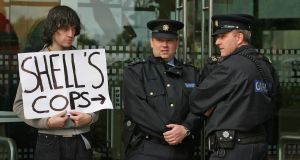 Natural gas is flowing into the national supply grid from the Corrib gas field off Co Mayo for the first time since it was discovered in 1996.

One of six wellheads, drilled in 350m of water 84km off the west coast, was opened on Wednesday by the field developer, Shell E&P Ireland.

This started gas flowing through a 20 inch diameter off-shore pipeline to an 8.3km-long on-shore pipeline, which includes a 4.9km tunnel beneath Sruwaddacon Bay, the longest in Ireland.

It continues from there into the company’s reception terminal at Ballanaboy, near Belmullet in Co Mayo.

Gas is then being pumped into the Gas Networks Ireland (GNI) network, which delivers it to Irish consumers.

“We’re delighted to have come to this point,” Shell managing director Ronan Deasy said. “Once we had our permit, we were essentially ready to start since September and today, we were able to open up our first well. We always believed we were going to get to this point.”

Permission to start bringing the gas ashore was granted late on Tuesday by Alex White, Minister for Communications, Energy and Natural Resources.

The project has been dogged by opposition, a major factor in a projected development cost overrun of €2.4 billion. However, this will be written off against profits, resulting in a projected loss to the taxpayer of some €600 million, based on the tax rate for the project profits of 25 per cent.

Between August 2005 and June 2014, the policing of sometimes-violent protests and protection of workers at project sites cost the State €16.4 million, mainly due to the deployment of gardaí.

The protests have largely run out of steam, but some opposition to the project remains.

Shell To Sea, a campaign group which has opposed the project throughout, denounced Mr White’s decision.

“Over the years, campaigners have been constantly lectured by politicians about the need to respect the laws of the land and courts, but again with Corrib we are seeing there is one law for them, another law for us,” said spokesman Terence Conway, describing Shell as “one of the most destructive companies the planet has ever seen”.

At peak production, Corrib has the potential to meet up to 60 per cent of Ireland’s gas needs and is expected to supply gas for up to 20 years.

More than 6,000 people worked on the development of the project, and more than €1.1 billion was spent in Ireland on contractors, sub-contractors and supply companies, including many businesses in north Mayo.

He said: “If there was a disruption to the supply of gas from Scotland, where 90 per cent of our gas comes from, even if it was just for a week, you would be able to measure the impact on our GDP. That’s how serious security of supply, and hence Corrib, is.”

ESRI researchers Seán Lyons and Edgar Morgenroth estimated in 2013 that a single day’s loss of supply from Scotland would, in the absence of an alternative source, cost the economy between €350 million and €640 million.

“To the minority who are not supporters, I hope we will be good neighbours and they will not notice us too much.”