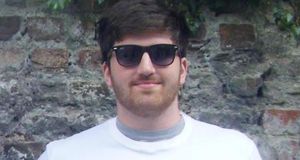 West Cork drowning tragedy victim Barry Davis Ryan proved the depth of his love for his girlfriend Niamh O’Connor by heroically trying to rescue her when she was swept into the sea, mourners at his funeral were told yesterday.

Danny Kelly, a family friend of the Ryan and the Davis families, paid a warm and affectionate tribute to the 20-year-old Cork Institute of Technology student who died on June 30th in an incident that also claimed the lives of his father, Barry Ryan (51), and girlfriend, Niamh O’Connor (20).

“He loved his soulmate, the beautiful Niamh with all his heart and he selflessly died trying to save her – Barry, just like his father, was a hero who, without hesitation, was willing to die for love,” Mr Kelly told mourners at Mr Davis Ryan’s funeral mass at Rath church outside Baltimore.

Leading the mourners was Mr Davis Ryan’s mother, Ann Davis; his older brother, Arthur; and younger sister, Charlotte, as well as his grandparents, Arthur and Rose Ryan, and other relatives and neighbours from Baltimore, where he grew up.

Mr Kelly recalled how close Mr Davis Ryan was to his family, his parents and his siblings, while he also recalled how outgoing and popular he was with both his friends at Cork Institute of Technology and workmates at Penneys, where he worked part-time.

Speaking on behalf of Ms Davis, Mr Kelly said the family would be forever grateful to so many people for the huge effort they put in to recover her son’s body so he could be buried beside his father, uncle and maternal grandparents at nearby Tullagh cemetery.

“Sometimes great good can come from bad. In a time of much apparent negativity, Barry in death was the key to not only bringing this mighty west Cork community so closely together but also galvanised an entire country and nation such was the collective effort made to bring his body home,” said Mr Kelly.

He paid tribute to everyone who contributed to the 11-day search and was particularly grateful to the volunteer West Cork Underwater Search and Rescue team, which organised the volunteer dive.

“We will never forget the honest and welcome look on John Kearney’s face when Barry’s body was returned to us with such dignity and such honour as he was brought back in flotilla to Baltimore last Friday,” said Mr Kelly.

“Nor will we ever forget the kindness and empathy of family liaison officer Garda Pauline Reid, who has been a rock of support for the family ever since the tragedy happened,” Mr Kelly said before also thanking Baltimore RNLI and the Irish Coastguard teams.

Before the conclusion of the funeral mass celebrated by local priest

Fr Michael Kelleher, Charlotte (13) read a poem her their father had written for her brother when he was just five years old in which he described him as “a little wizard chap” full of imagination.

After mass, friends formed a guard of honour before Mr Davis Ryan was laid to rest beside his father.