Mother ‘ordered off’ Dublin Bus because her baby was crying 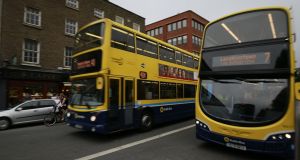 A statement from Dublin Bus said: ‘We are aware of this incident. Dublin Bus is investigating.’ Photograph: Nick Bradshaw

Dublin Bus is investigating claims one of its drivers asked a woman to get off because her child was crying.

The woman said she was “mortified” at having to leave the bus with passengers looking on as the driver refused to move any further.

She told RTÉ’s Liveline programme she had been on her way home to Finglas from her daughter’s crèche.

Her 20-month-old became unsettled and despite her efforts, the woman could not calm her.

“As you can imagine a 20 month old is quite difficult to manage,” she said.

“People were looking at me kind of smiling and thinking, oh he must be having a laugh.”

However, the driver then told her he could not concentrate on driving and insisted she leave even though she explained she did not have much further to go.

“I was completely mortified as you can imagine, you always feel as if all eyes are on you,” she said.

“He was refusing to move, he wasn’t moving from the bus stop. And she was still screaming so obviously my first thing was to try and calm her down so I had to get off the bus.”

She got off and walked home with the child in her buggy and later called Dublin Bus to complain. The company had called to apologise, she said.