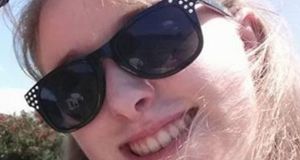 ‘As a sister Louise was the best you could ask for. She shone bright with excitement,’ Declan Clancy has told her funeral.

A mother and daughter who died in a road collision on Tuesday were the heart and soul of the family, their funeral has been told.

Geraldine and Louise Clancy were laid to rest on St Stephen’s Day in Kilworth, Co Cork.

Relatives shouldered the coffins into St Martin’s Church in inclement conditions as locals packed the church and an adjoining hall where the Mass was delivered over a loud speaker.

Geraldine Clancy (58) and her daughter Louise (22) died close to their home in Kilworth in a two-car collision on the Fermoy to Ballyduff Road shortly before 11.40am on Tuesday.

Ms Clancy’s car was pushed through a gap in a stone wall and rolled over onto its roof into 4ft of water in a flooded field adjacent to the River Blackwater.

Declan Clancy stressed that his late mother and sister would forever be missed as they were the very heart and soul of the family.

He said his father Noel proposed to his mother Geraldine at their very first meeting. The only catch was that he was proposing her for a position in the local Macra na Feirme executive — the actual marriage proposal came a bit later.

Declan said the Clancy house was a very happy and content home.

“(Geraldine) was a brilliant Mam and wife. We all loved her dearly. We were a very happy family. She was the best Mam anyone could have asked for. She loved us. She encouraged us. She made sure we had every opportunity in life. Her love for us and dad was endless.”

Declan told mourners that his sister, Louise, packed a lot in to her 22 years of life.

“It would take hours to tell all her stories. As a sister Louise was the best you could ask for. She shone bright with excitement. She was the most genuine person we knew. She had many true friends that she loved and who loved her in return. Louise was herself at all times. Louise was warm hearted clever and funny.”

Declan said Louise was the bravest and kindest person he had ever met.

“Things were really going her way over the last two years. She was storming it at university. Her journalistic ambitions were taking off. She had a boyfriend she really loved. When she passed away it was the happiest she had ever been.”

At the time of her death Louise was a third year arts student at UCC. However, she was on an Erasmus exchange programme for a year. They were laid to rest at St Michael’s Cemetery in Ballyduff, Co Waterford following noon mass in Kilworth.