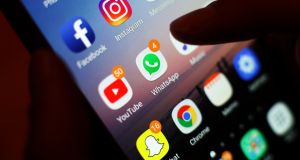 The survey found that 67 per cent of respondents believe that, on balance, social media does more harm than good, with 42 per cent claiming they would like to completely stop using it. Photograph: Yui Mok/PA Wire

Irish millennials are increasingly gloomy about the prospects for the economy and their own social media habits, according to research examining youthful attitudes published on Tuesday.

They are also struggling to find leaders they can put their faith in, the annual millennial survey from Deloitte indicates.

It also found that a significant majority of Irish young people believe climate change is the most pressing concern facing society, while more than two-thirds say travelling widely, seeing the world and earning a lot of money are among their top priorities.

The research, part of a global survey of more than 13,000 people including 300 from Ireland, points to a generation disillusioned by traditional institutions, sceptical of the motives of businesses and pessimistic about economic and social progress.

It found only one in five young people believe politicians or religious leaders have a positive impact, with the cohort likely to place considerably more trust in non-governmental organisations.

When asked if they believe the Republic’s economic situation will improve over the next year, just 28 per cent of people born between 1983 and 1994 answered in the affirmative, a decline of 20 points in 12 months. And only 21 per cent said they expected the social and political situation to improve over the same period.

Climate change and protecting the environment were among the top concerns for Irish millennials, with 48 per cent saying it was their top priority, significantly higher than the global average of 29 per cent.

The survey also suggests that by comparison with their global counterparts, more Irish young people dream of buying a home of their own and having children. All told, 62 per cent of Irish respondents expressed a desire to buy their own home compared with a global figure of 49 per cent, while 46 per cent said they viewed having children as a priority compared with 39 per cent globally.

The survey found two-thirds of those polled expressed a desire to see the world and be wealthy enough to be able to do it.

It also found that 67 per cent of respondents believe that, on balance, social media does more harm than good, with 42 per cent claiming they would like to completely stop using it.

Millennials also appear sceptical when it comes to cybersecurity; 85 per cent expressed concern they will be victims of online fraud, and 76 per cent are worried about how organisations obtain personal information. An additional 75 per cent feel they have no control over who has their personal data or how they use it.