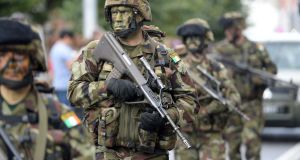 Raco is seeking the establishment of a stand-alone pay review body for the Defence Forces. Photograph: Alan Betson

Taoiseach Leo Varadkar has said strengthening the Defence Forces will take time and retaining personnel at present was a “real challenge”.

However, he said he was confident “we are back on track” after military officers voted to accept new Government pay proposals.

Delegates at the annual conference of the Representative Association for Commissioned Officers (Raco) in Co Kildare backed the proposals by more than a two thirds margin in a closed session on Monday.

In a statement issued following the vote, Mr Varadkar said the € 10 million pay proposals, which were announced in July, would result in an increase in take home pay for personnel from this year.

“That will help with retention which is a real challenge at present. We are committed to building on that further in the next public service pay deal,” the Taoiseach said.

Raco general secertary Commandant Conor King said during a debate before the vote on Monday, there was a “lot of frustration and disappointment at the meagre increases” set out in the Government proposals, which were based on the recommendations of the Public Service Pay Commission.

He said delegates had voted to put their faith in an implementation plan for putting in place the recommendation of the Pay Commission which had been drawn up by the Government in July.

He said the proof of whether or not the plan was succeeding would be seen in the figures for the strength of the Defence Forces on a month-by-month basis.

“What we are seeing is in fact a form of permanent strike action as people are leaving the job they love, never to return. Without major surgery in the form of proven retention intitiaves, this wil continue,” he said.

Cmdt King said there had been robust discussion on the pay proposals but members took some encouragement from the involvement of the Department of the Taoiseach in the implementation plan.

The number of personnel in the permanent Defence Forces is now about nine per cent below the establishment figure of 9,500.

Comdt King said the turnover rate of personnel was now running at about ten per cent.

He said this meant that even with the current rate of inductions into the Defence Forces, the 9,500 figure will never be reached.

He said the only way to reduce the turnover rate in the Defence Forces was “to improve the package and the overall offer” including pay, allowances and accommodation.

Among the pay proposals agreed by the Government in July were a 10 per cent increase in military service allowance which is paid to the vast bulk of members of the Defence Forces.

The Government also said it would restore a number of allowances that were cut under the Haddington Road agreement in 2013.

Raco is seeking the establishment of a stand-alone pay review body for the Defence Forces.

The organisation representing enlisted personnel in the Defence Forces, PDFORRA, has sought to affiliate as an associate member of the Irish Congress of Trade Unions.

Military management in the Defence Forces is understood to be extremely concerned about any link up with the trade union movement.

The Defence Forces chief of staff Vice Admiral Mark Mellett andthe Minister of State with reposnsibility for defence Paul Kehoe will address the Raco conference on Tuesday. Mr Kehoe is expected to say he is looking at re-introducing fixed term promotions for officers inspecialist positions.