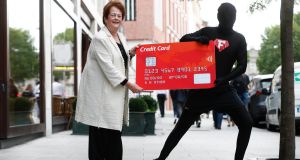 Former minister Mary O’Rourke has spoken of how she was almost taken in by a fraudster purporting to be from the Revenue Commissioners.

Mrs O’Rourke (82) said she received a call recently from a man who told her that she had paid too much tax last year and he would make an immediate repayment to her if she gave him her bank account details.

The former minister for education said she then realised it was a scam and she insisted the man purporting to be from the Revenue Commissioners post out the cheque to her.

“I was defrauded for half that conversation and I think I’m smart. It’s so easy,” she said at the launch of Fraud Awareness Week, run by the Banking and Payments Federation Ireland (BPFI), the representative body for the industry in Ireland.

She also said that last Friday she received a phonecall from a man asking her to reveal the pin number for her debit card. She hung up on him.

“My advice, especially for older people, is to learn the warning signs so that you can act at the time,” she said.

A FraudSmart survey revealed the average scam by fraudsters in Ireland is for €1,005, but that figure rises to €1,320 among people aged 55 and over.

FraudSmart is a fraud-awareness initiative developed by the BPFI in conjunction with AIB, Bank of Ireland, KBC Bank, Permanent TSB, Ulster Bank and An Post.

An average of 33 per cent of Irish people say they have lost money to a fraudster.

One in five older people (22 per cent) are targeted at least weekly by attempts to defraud them. Older people are most likely to be targeted via email (37 per cent) but phone calls to landlines account for nearly one in three attempted scams.

Active Retirement Ireland president Kay Murphy said €4,000 was taken from her Visa card and credit card after her account was compromised last year.

She said older people are more vulnerable to potential fraudsters than the rest of the population.

Det Garda James O’Meara of the Garda National Economic Crime Bureau. said many fraudsters have a prepared script and know how to use it. “They are extremely good at using that script and delivering it to you. They sound believable.”

A common scam was for fraudsters to ring up and threaten people that they will lose their broadband by the end of the day. He said the threat of immediate action was becoming more common and people should not succumb to it. “If you think it’s not right, shut the call down,” he said.

He stated that there was an “element of embarrassment” for some people caught up in scams, but they should not be afraid to contact the Garda.

“We have heard it all before. We have seen every scam going. Don’t be embarrassed to contact your Garda station,” he said.

He said 90 per cent of fraudsters come from outside the State, but they have “money mules” in Ireland who are willing to allow their bank accounts be used to launder fraudster’s money, he explained.

BPFI FraudSmart programme director Niamh Davenport said customers should never hand over their bank details if they are in any doubt and should also never click on the links to potentially fraudulent emails.

One in five young people have experienced abuse by partner, study finds 13:47
Boris Johnson confirms Santa is ‘ready and raring to go’ 13:42
Recipients of PUP to get Christmas bonus on December 8th 13:36
December sky: Jupiter and Saturn to appear closest to each other since 400 years ago 13:33
Woman threw TV off balcony injuring person walking below, court told 13:26