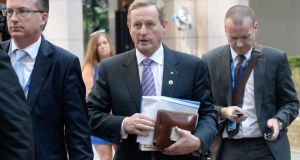 Taoiseach Enda Kenny arrives at the European Council headquarters for an extraordinary summit of EU leaders to deal on the migration crisis in the Mediterranean. Mr Kenny says the State will contribute a ship to rescue efforts in the region. Photograph: Thierry Charlier/AFP/Getty Images

The Republic is to contribute a fully crewed and equipped ship to search and rescue efforts in the Mediterranean, Taoiseach Enda Kenny has said.

Speaking on his way into today’s EU extraordinary summit in Brussels on migration, the Taoiseach said that the State would offer a naval vessel to humanitarian operations in the Mediterranean.

“Depending on the caveats and the legal requirements here in respect of search and rescue for humanitarian functions, we are prepared to allocate a fully crewed and equipped naval vessel once the legal clarifications become clear.”

It is understood that the vessel would only participate in humanitarian activities.

UK prime minister David Cameron said that Britain would contribute its navy’s flagship, the HMS Bulwark, along with three helicopters and two border patrol ships to the rescue efforts, but ruled out accepting a share of refugees.

“As the country in Europe with the biggest defence budget we can make a real contribution,” Mr Cameron said.

Speaking ahead of the summit, European Council president Donald Tusk said that “saving the lives of innocent people” is the number one priority for the EU. “But saving lives is not only about rescuing people at sea. It is also about fighting the smugglers and preventing illegal migration flows.”

Mr Tusk said that leaders would also discuss how to reinforce European solidarity on difficult issues such as resettlement, relocation and the processing of asylum applications.

“Nobody has any illusions that we can solve the problem today. We cannot because the real causes are war, instability and poverty in the whole region. And for sure Europe is not the cause of the whole situation in the Mediterranean. But we must all make a greater effort to handle the worst consequences and I am sure that we can agree on common and concrete action today.”

EU leaders are expected to sanction the doubling of funding and an increase in resources for Frontex, the EU’s border control agency at their meeting today. EU leaders are also due to discuss the possibility of targeting and destroying illegal smuggling vessels before they leave their point of departure, although no final decision is expected to be made this evening.

Leaders are expected to consider a programme to resettle at least 5,000 refugees in Europe, though this would be on a “voluntary, pilot” basis, according to the latest document under consideration by leaders.

According to the UN’s refugee agency, 219,000 refugees and migrants crossed the Mediterranean last year, and at least 3,500 died attempting the crossing.

More than 1,000 refugees are believed to have died attempting the journey this month alone.