Mayo view of All-Ireland: ‘Two own goals ... has never been heard of’

Mayo fan Micheál Cusack: ‘If we play again like we did today, we will win the replay’ 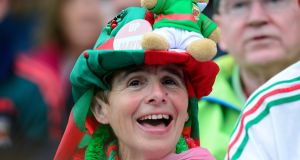 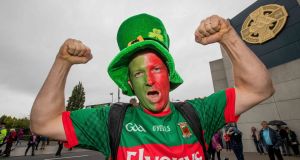 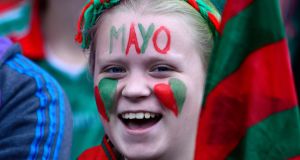 I love Mayo: A fan in green and red during the All-Ireland football final between Dublin and Mayo at Croke Park. Photograph: Cyril Byrne/The Irish Times

Was it going to be eighth time lucky for Mayo in an All-Ireland football final, or would the 65-year wait for a visit from Sam Maguire go on?

Ahead of the throw-in at Croke Park today, Jamie Ballard (5) and his family had gathered in McGing’s pub in Westport to see if the painful losing streak would be broken.

“C’mon Mayo, Hammer the Dubs,” said Jamie, as he and his cousin Jack Duffy (2) drew green and red pictures in their colouring books on an afternoon where Dublin’s blue was banned.

Mayo was more muted than usual in the build-up to the final but hopes of a victory celebration in the county on Monday night were being quietly discussed in nooks and crannies from Belmullet to Ballinrobe, Louisburgh to Lahardane.

At The Helm bar at Westport Quay, big bruisers of dinners were being served to swarms of green and red clad supporters, who seemed anxious despite a rallying cry from Taoiseach Enda Kenny to his county men and women “to dare to dream”.

Speaking before the game, Sligo IT student Naoise McCabe was dressed in the county colours as she served up darnes of Clare Island salmon and praties. “I’ll be on the bus back to college in Sligo when the match starts but I’ll be listening to Midwest radio. I am so nervous for them,” she said. 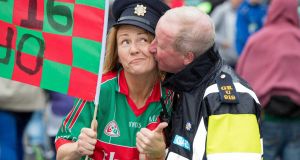 Gallery: Up for the Match Mayo and Dublin fans around Croker for All-Ireland Football Final 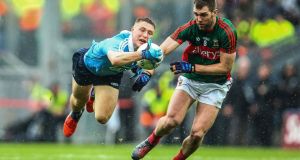 Gallery: All-Ireland SFC Final All the colour and action from Croke Park as Dublin meet Mayo

Back in McGing’s bar there was an unholy roar - albeit anticipatory - as the “county warriors” ran out onto what Mr Kenny had dubbed “the sacred pitch” of Croke Park.

It was nothing like the roar though when captain Cillian O’Connor equalised in the dying seconds.

The late point provided a surprise sense of relief after what had been a tense and hushed half-time break, as a five-point deficit saw trays of sandwiches left uneaten and a shaky fan ordering a brandy and port.

When the final whistle was blown, a collective sigh of relief rushed through the bar.

“Today was our chance to win,” said Micheál Cusack. “Two own goals in an All-Ireland final, it has never been heard of. But if we play again like we did today, we will win the replay.”

For one Mayo fan from Milan, Beatrice Deorde, the excitement was “bellissimo”.

A volunteer assistant in a local hostel, she has been in the county just for three weeks but has taken a crash course in Gaelic football - and dressing in green and red.

When the final whistle blew and the teams left the pitch, the Italian was somewhat baffled.

“But what does this mean now?” she asked.

“We have to do it all over again,” a wistful looking fan said.