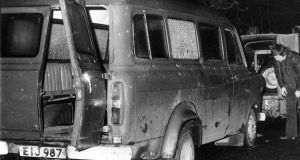 A man has been arrested on suspicion of the sectarian murders of 10 Protestant workmen at Kingsmill, one of the worst atrocities of the Northern Ireland Troubles.

The 59-year-old suspect was detained in Newry, Co Down, by detectives investigating the mass shooting at Kingsmill, Co Armagh, 40 years ago.

The development in the unsolved case came two months after police announced a major forensic breakthrough.

At the end of May, the Police Service of Northern Ireland revealed that a potential match had been made to a palm print left on a getaway van that had been used by the republican paramilitary killers.

The sole survivor of the attack, Alan Black, who was shot 18 times, described the arrest as a “bolt from the blue”.

The suspect is being questioned on suspicion of the 10 murders and Mr Black’s attempted murder.

The factory workers were ambushed as they travelled along the Whitecross to Bessbrook road in rural south Armagh on January 5th, 1976 in an attack seen as a reprisal for a series of loyalist killings in the same area in the days beforehand.

The men’s minibus was stopped by a man waving a red light and those on board were asked their religion by a camouflaged gunman with an English accent.

The workers had initially mistaken the man for a soldier.

The only Catholic workman was ordered to run away.

The killers, who had been hidden in the hedges, ordered the remaining 11 Protestant men to line up outside the van and then opened fire.

A van used by the gunmen was later found abandoned across the Border. The palm print was discovered on that vehicle.

It was re-examined by forensic scientists this year, only days after a long-delayed inquest into the deaths got under way in Belfast.

A lawyer for the PSNI told stunned relatives attending the hearing that a potential match on the police’s database had been made.

It emerged that a forensic scientist had asked to run fresh tests on the print after reading media coverage about the opening of the high-profile inquest.