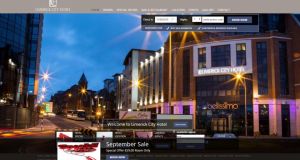 Part of a hotel in Limerick was destroyed on Friday night after firemen broke through the front of the building to try to prevent a fire spreading.

The fire broke out at the Limerick City Hotel, on Lower Mallow Street, around 8pm, and began spreading through the brickwork and service ducts.

A hotel source said around 100 guests were staying at the hotel.

Everyone inside the hotel, formerly Jury’s Inn, were evacuated, including staff and patrons of McGettigans bar which is located on the ground floor.

Smoke could be seen pouring out of the brickwork along the front of the six-storey building.

Limerick Fire Service Station Officer James Keirns, said: “We got a call about an alarm going off on the sixth floor. After some investigation we found the fire on the first floor, out of the front of the building.”

“The smoke was progressing through the cavities of the building and moving around.”

“We eventually got to it. We’ve exposed the fire and we’ve got the fire under control,” he added.

“Thankfully we got the hotel evacuated promptly,” he said.

“We do not know (the cause), but certainly, insulation was involved.”

“The insulation caught fire and ran up through the cladding and the brickwork and went through some of the ducts and into the building,” he explained.

“We’re exposing the front cladding, and the facade, taking down the facade, and making sure it’s all out up along the outside.”

“Then we’ll clear the building (of smoke) possibly with fans and see what the situation is then.”

Over 20 firemen attached to Limerick City, Cappamore, and Shannon brigades responded to the scene.

There were unconfirmed earlier reports the fire had started in a boiler room at the hotel, however sources within the fire service later said they were investigating a possible electrical fault.

There were no reports of any injuries.

According to a source a number of the hotel’s rooms and corridors were damaged by smoke.

“There are lots of rooms smoke logged,” said the source.

Firemen, attached to a high rise ladder, frantically tore through the front of the hotel with heavy duty equipment, as they followed the fire from the first floor up to the sixth floor.

A large hole has been left in the front of the building where the firemen ripped through the facade in search of the fire.

Guests from France, Germany, Uganda, and Ireland looked on stunned from across the street as large chunks of the building fell to the ground below.

Gardaí sealed off the hotel and placed a cordon around the building.

Gardaí also closed off Lower Mallow Street to avoid any potential injuries from the falling rubble.

Guests were first brought to the nearby Brimstone bar for refreshments and later accommodated in other local hotels.