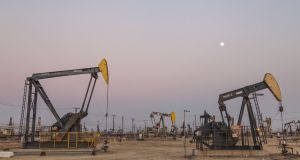 The process over the question of potentially fracking for gas in Co Leitrim has been suspended pending a study commissioned by the Environmental Protection Agency. File photograph: Citizens of the Planet/Education Images/UIG via Getty Images

Anti-fracking campaigners have called a public meeting for Wednesday night to discuss the commencement of drilling in Co Antrim.

The meeting, to be held in Bee Park, Manorhamilton, Co Leitrim, has been called following an announcement that an exploratory oil well has been drilled in Woodburn Forest, outside Carrickfergus.

The meeting is being held in Leitrim because companies have expressed an interest in fracking there, though the process has been suspended pending a study commissioned by the Environmental Protection Agency (EPA).

The Woodburn Forest site has been subject to heavy security and a camp has been set up around it.

InfraStrata, the company behind the project, confirmed the commencement of drilling at the site on Monday and said it will go on for six weeks.

Its chief executive Andrew Hindle said the drilling will be handled in an “environmentally responsible and safe manner” and will seek to minimise disruption for local residents.

“In our wildest dreams we could not imagine that the industry could come on site without planning permission or an Environmental Impact Assessment (EIA), but they have,” she said.

“We need to target politicians North and South to stop this operation in its tracks. The drill has probably already gone below the aquifer, it will go down 6,000 feet more in the next five weeks.

“This drilling project in Antrim is too dangerous. It could lead to massive exploitation across Antrim by the oil and gas industry, with all its attendant well-documented impacts on the environment and on human health.”

The meeting takes place at 8pm.