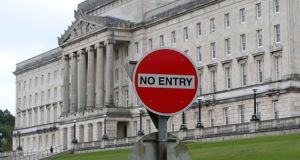 The Northern Executive is to be taken to court over the implementation of its Irish language strategy.

Conradh na Gaeilge is to challenge the executive over what it sees as its failure to implement the Irish language strategy 2015-2035.

The 20-year strategy for Irish by the North’s Department of Culture was launched in January 2015and was welcomed at the time by Conradh na Gaeilge as a “significant step forward” for the language.

The publication of the strategy followed agreements between the Irish and British Governments, which led to the Northern Ireland (NI) Act 1998 being amended in 2006 to include a requirement for the Executive to “adopt a strategy setting out how it proposes to enhance and protect the development of the Irish language”.

The language rights organisation said the Irish-language community is “hugely disappointed and frustrated that the Executive hasn’t adapted the Irish language strategy to promote and to protect our language.”

Conradh na Gaeilge president Cóilín Ó Cearbhaill pointed out that the British government had pledged to implement an Irish language strategy as part of the 2006 St Andrew’s Agreement.

Despite “progressive steps” having been taken, Mr Ó Cearbhaill said Conradh na Gaeilge “finds it unsatisfactory that the strategy has not yet been accepted by the Executive”

Ciarán Mac Giolla Bhéin, advocacy manager with Conradh na Gaeilge said the organisation believed the NI Executive’s “inaction” warrants a court case in order “to legally oblige them to fulfil their obligations and to implement their own programme for government by giving the Irish-speaking community the support they deserve.”