Irish in ‘good spirits’ as plane leaves Peru for Dublin 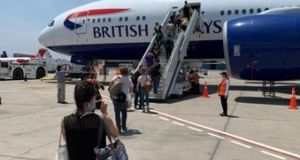 Passengers boarding the British Airways flight taking them from Lima to London. From there an Aer Lingus plane with take them to Dublin. Photograph: Gearóid McKendrick

A plane carrying Irish tourists stranded in Peru by the coronavirus pandemic left Lima on Sunday afternoon local time and was due to land in Heathrow on Monday morning.

British Airways charter BA 9117 departed two days after the Government secured permission for the flight from authorities in Peru. An Aer Lingus plane will bring the group to Dublin Airport later on Monday.

About 135 Irish tourists, most of them backpackers, registered for repatriation after being stranded in the country when Peru’s government ordered the closure of its borders on March 16th as it imposed a strict 15-day national lockdown in response to the global pandemic.

It was not immediately clear how many of those registered with the Department of Foreign Affairs boarded the flight which also included British nationals. Two further British Airways flights from Lima organised by the British embassy there are planned to leave on Monday.

Many of those on Sunday’s flight were ferried to Lima on buses that left the cities of Cusco, Puño and Arequipa on Saturday afternoon, arriving at a military airbase in the capital Sunday morning where they were greeted by British military personnel.

“They met us in Lima, briefed us on the bus and then escorted the bus into the base. Once in the base they seemed to be co-ordinating all the check-in and then alongside British embassy staff getting all passengers to the plane. There were good spirits on board,” said Galway native Gearóid McKendrick from the plane before departure.

The flight left at 1.35pm local time, 2½ hours ahead of schedule.

Mr McKendrick was part of the group which had come by bus from Cusco where he had been stranded since St Patrick’s Day following his trip to the ruins in Machu Picchu. Repatriation will cost each traveller €400 but they were not required to pay the fare in advance.

The airbase from which the flight left has become the main hub of an international repatriation effort of foreign nationals stranded in Peru ever since authorities closed the main international airport last weekend.

The closure of the country’s biggest airport and strict travel restrictions within the country in response to the pandemic has left thousands of foreign travellers frustrated at the delay in evacuating them. It took the Government five days to secure a slot for the repatriation flight.

Peru has 852 confirmed cases of Covid-19 and registered 18 deaths as of Sunday.