Hundreds of staff recruited to deal with passport demand

Passport service in ‘peak season’ with 53,139 applications in the system 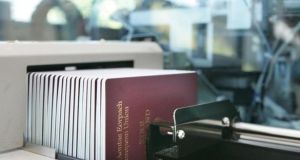 Charlie Flanagan: “The referendum in Britain has in no way changed the entitlement to an Irish passport”. Photograph: Dara Mac Dónaill

Hundreds of temporary staff have been drafted to the passport office to help deal with the large increase in passport applications this year.

New figures show the passport service is in “peak season” with 53,139 application in the system as of July 1st, an 11 per cent increase compared with this time last year.

In a reply to Kerry TD Michael Healy-Rae, Minister for Foreign Affairs Charlie Flanagan said the situation has improved in recent weeks however.

“On 31 May, there were a total of 68,009 applications in the system and this figure has fallen throughout June”, said the Minister.

Mr Healy-Rae had called on the Mr Flanagan “to provide additional resources to the passport office to deal with the mountains of applications”.

Mr Flanagan said: “To respond to the seasonal spike in demand and the more general increase in applications, a total of 233 temporary clerical officers have been recruited so far this year, an increase of 62 on last year.

“Furthermore, processing work has been redistributed across passport offices and staff have been redeployed from other areas of the Department as needed.”

In the wake of Britain’s vote to leave the European Union, Mr Flanagan urged British citizens eligible for an Irish passport need not rush to apply for one as Brexit negotiations are likely last at least two years and will not affect an applicant’s eligibility for an Irish passport.

“The referendum in Britain has in no way changed the entitlement to an Irish passport, including as it extends to people born on the island of Ireland and those who may be entitled to Irish citizenship through parents or grandparents who were born in Ireland,” Mr Flanagan said.

“While there is likely to be an increase in the number of first-time applications submitted from the UK and British people living overseas, it is too early to assess how significant this will be,” Mr Flanagan said.