Howlin to clamp down on party leaders’ allowance

Restrictions to controversial payment to include new audit requirements 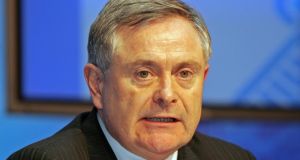 The Government is to introduce restrictions, including new audit requirements, to the operation of the controversial party leaders’ allowance system.

Until now, the scheme permitted Independent TDs and Senators to receive thousands of euros in personal and unvouched funding from the exchequer.

In a report published last night, the Department of Public Expenditure and Reform said the Minister, Brendan Howlin, would bring proposals to Government very shortly on amending legislation underpinning the allowance.

The Minister is awaiting a final reply from the Ceann Comhairle on the views of the Oireachtas commission on possible changes to the system.

The department said it noted – not accepted – calls by the Dáil Public Accounts Committee (PAC) for an independent review to set the appropriate rate, if any, for allowances paid to politicians holding specific positions in the Dáil, Seanad and on Oireachtas committees. The committee was told at hearings last autumn that nearly €7.5 million was paid out under the leaders’ allowance system in 2011.

Independent TDs received nearly €40,000 on average in unvouched payments under the scheme, with Independent Senators receiving about €23,000.

The report, published last night by the PAC, said Mr Howlin had already announced a 10 per cent cut in rates paid under the party leaders’ allowance. It also signalled that new auditing provisions on how money provided under that scheme was spent would be put in place for Independent Oireachtas members.

Separately, the department has warned that any move to incorporate over €50 million paid out annually in military service allowance into the core pay of members of the Defence Forces must not lead to an increase in pension costs for the State.

The military service allowance is a universal payment made to all military personnel which, according to the Department of Defence, is designed “to compensate them for the unique demands of military life”.

Earlier this year, the PAC urged that pay scales for members of the Defence Forces should be revised to incorporate the payment of the allowance, which costs the State about €53 million annually.

In a reply to the report, the secretary general of the Department of Public Expenditure and Reform, Robert Watt, said the Government had recognised that there were possible weaknesses in the pay structures in the Defence Forces “as these have evolved over very many years and have become increasingly complex”.