Gildernew back on Sinn Féin ticket for Assembly elections 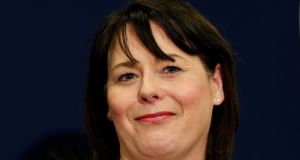 Sinn Féin, in a third selection convention for the constituency of Fermanagh-South Tyrone, has put former MP and minister of agriculture Michelle Gildernew on the ballot paper for next May’s Northern Assembly elections.

After something of a comedy of convention errors, a special convention held for the South Tyrone part of the constituency on Friday chose Ms Gildernew to stand for the party in the May election.

This has all been rather embarrassing for Sinn Féin. Nine weeks ago a selection convention was held where Ms Gildernew, Fermanagh Assembly member Seán Lynch and John Feely, a Fermanagh councillor, were selected to contest Fermanagh-South Tyrone.

Another sitting Fermanagh MLA Phil Flanagan lost out at that convention. The selection, however, was found to be procedurally invalid and was rerun three weeks ago,

This resulted in in Mr Flanagan being reselected and Ms Gildernew losing out.

This meant that all three Sinn Féin candidates in Fermanagh-South Tyrone were from Fermanagh, and that Ms Gildernew – one of the party’s most popular figures – was bumped off the ticket.

Party headquarters then moved to get her back in the race by calling a special convention for South Tyrone alone on Friday, at which Dungannon woman Ms Gildernew was selected.