No reports of injuries in blaze that affected three historical cottages in Adare, Co Limerick 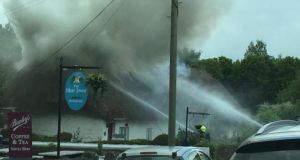 Adare village was closed for most of Saturday as six fire crews from Limerick County accompanied by additional crew from the city, battled the fire for several hours. Photograph: Barry O’Halloran 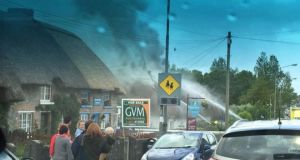 Adare village was closed for most of Saturday as six fire crews from Limerick County accompanied by additional crew from the city, battled the fire for several hours. Photograph: Barry O’Halloran

A large fire broke out in Adare, Co Limerick on Saturday afternoon, destroying a number of thatched cottages in the village but with no reported injuries.

One cottage, built in 1826 by Lord Dunraven, was gutted in the blaze. A second was burned to the ground. Serious water damage was caused to a third cottage.

The blaze broke out shortly after 1pm, just as a wedding was due to start across the road in the village’s 13th-century Holy Trinity Abbey Church.

Eleven thatched cottages, which sit in a row on the main street, were built by the Dunraven family as staff houses.

Locals described it was a “horrible tragedy” for Jane and Henriette Benson, the occupants of one of two gutted cottages.

Locals said the second cottage, destroyed in the fire, is owned by an Irish-American businessman who resides in New York.

A woman who had been renting the property, and was preparing to move out, lost all her possessions in the fire after she had packed everything.

A third cottage, home to Lucy Erridge crafts, sustained serious water damage but was saved from the fire.

Adare village was closed for most of Saturday as six fire crews from Limerick Co, accompanied by additional crew from the city, battled the fire for several hours.

An investigation is underway.