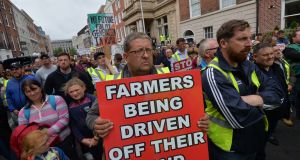 Farmers protesting outside the Dáil. The IFA has accused the Sustainability Energy Authority of Ireland of “straying outside its remit”. Photograph: Alan Betson

The State’s largest farming organisation has accused the Sustainable Energy Authority of Ireland (SEAI) of “demonising” red meat and “virtue signalling” after it told delegates at a conference the product would not be served.

In an invitation to the event, the SEAI listed a series of actions taken to ensure its sustainability, including that it had “chosen not to provide any red meat and have a variety of vegetarian options available”.

The move was listed alongside measures such as the use of paperless ticketing and an absence of single-use plastics. Attendees were also encouraged to bring a keep cup, and use a reusable water bottle on the day.

The Energy Research and Policy Conference was hosted on Wednesday in association with the Department of Communications, Climate Change and Environment.

Mr Healy argued that diet should focus on choice and balance, and that “it is completely wrong that an individual or individuals in the SEAI would impose their personal biases in this way”.

“It would make perfect sense for the SEAI to offer meat and non-meat choices to their invitees and people could then decide which to opt for. This smacks of virtue signalling by a State agency which is charged with energy sustainability, but has decided to get in on the diet debate and jump on the bandwagon.”

Mr Healy asked if Minister for Climate Action Richard Bruton, who attended the event, “stands over this stance by the SEAI”.

The Department of Climate Action referred queries on the event to the SEAI, which said in a statement that it endeavours to make all of its “events as sustainable as possible”.

“This includes eliminating the need for paper by providing e-tickets and emailing presentations, eliminating the use of single-use plastics, and providing varying food options at different events in a balanced way so some events would have red meat and others can be used to showcase other options fairly.”

Taoiseach Leo Varadkar was forced to defend himself in January after he said he was eating less red meat in an effort to do more for the environment. Farmers were incensed by the remarks, with the Fine Gael leader and Dublin West TD accused of being out of touch with the interests of rural Ireland.

Farmers groups and rural TDs criticised Mr Varadkar, although it later emerged that environmental scientists and others had written to the Taoiseach to express their support for his position.

During the summer the livelihoods of beef farmers and farm incomes were the focus of high profile rolling protests at meat plants by the grassroots Beef Plan Movement and others.