Eamon Ryan says the Green Party is ‘back’ and ‘effective’ 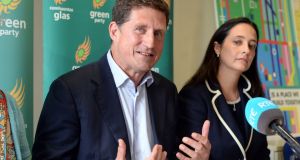 “We are back and we are effective” said leader Eamon Ryan as the Green Party’s annual think-in at its headquarters on Dublin’s Suffolk St wound down early on Saturday afternoon.

Speaking just before most of 30 or so delegates in attendance left to join the March for Choice, Mr Ryan was upbeat even as he expressed concern that the Government was “going right back to the same economic model that created the boom and bust”.

He warned against focussing on “growth at all costs” and “pumping up the property market again” and called for a “revolutionary change in the way our country works”.

He said the country had to address the climate crisis and pointed out that there was “everything to gain from switching to a more sustainable economic model. Environmentalism is no longer about just environmental issues. It’s about building better housing, transport, energy, food, health and education systems,” he said.

He said a better Ireland could be delivered “by building consensus through involving as many people as possible in decision making. That is why we work with every party in the Dáil. That is why we collaborate with the Government when we support what they are doing and highlight their failings when we need to”.

Mr Ryan suggested the left versus right political divide was disintegrating in the Republic and he pointed to Fianna Fáil aligning with the Socialist Party in regard to water charges and Fine Gael and People Before Profit appearing as bed fellows when it comes to tax cuts.

“Both sides still stick to an out-of-date growth model that is not delivering for our people. We need both state enterprise and responsible business. We need both social protection and individual personal responsibility. More than anything else we need to protect our children’s future by acting in their interest now.”

Deputy leader and newly elected TD Catherine Martin described the first term of the new Dáil as a good one for the party.

“Already we have shown what can be done with three representatives. We passed a motion in both Houses on the same day calling for the release of Ibrahim Halawa, we brought 5,000 acres of Dublin mountain that up for sale by Nama into a national park and we changed the terms of the reference of the Citizens’ Convention to start a new national dialogue on climate change.”

She said a bill proposing a directly elected Lord Mayor for Dublin would be central to the party’s activity when the Dáil resumes and called for all party support for the proposals.

When asked if he had a target for the number of Dáil seats he would like the Green Party to win at the next election, Mr Ryan said they had six seats when they last formed part of a government.

“I think you need those sort of numbers and that is what we should be aiming for. And then in the next election we should double that. And then double the number of seats again in the election after that. Becoming a large mainstream political party has to be our aim.”