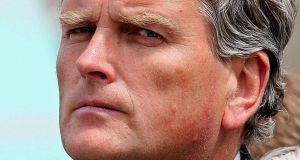 The DUP’s Jim Wells, who has apologised for controversial remarks he made about gay marriage and child abuse. Photograph: Julien Behal/PA Wire

The DUP is standing by its Health Minister Jim Wells following remarks about gay couples and child abuse despite concern at a senior level in the party that the controversy could be electorally damaging.

There were several calls for Mr Wells to resign his ministry after he told a South Down hustings event on Thursday that “the facts show that certainly you don’t bring a child up in a homosexual relationship, that a child is far more likely to be abused and neglected”.

The PSNI is now investigating an official complaint made to it about his comments and Sinn Féin Deputy First Minister Martin McGuinness said Mr Wells’ position was “no longer tenable”. The SDLP has tabled a motion of no confidence and censure in the Minister and there was criticism from several other quarters even though he quickly apologised for his remarks.

Senior DUP sources were dismayed by this controversy, acknowledging that a key element of the party’s election strategy was to reach out to more liberal unionists to try, in particular, to regain the East Belfast seat Naomi Long of Alliance took from Peter Robinson in 2010.

The DUP in its election campaign has contended that with the possibility of a hung parliament it could play a “pivotal” role in the formation of the next British government. Liberal Democrat leader Nick Clegg said people should be alarmed at the possibility of the next government “dancing to the tune of… some of these truly, truly, backward-looking views from the DUP”.

Mr Wells’ wife, Grace, has been in hospital for about three months after suffering two strokes and he said that it was for this reason he was not properly focused on the debate. “I regret having wrongly made that remark about abuse and I’m sorry those words were uttered. The comment did not reflect my view nor that of my party.”

Mr Wells said that “within seconds of realising this error” he asked be let back into the debate to correct his remarks. “Partial clips, spin and selective reporting regrettably miss this,” he said. “The neglect or abuse of children is awful and happens in unstable relationships whether they are heterosexual or homosexual,” he added. “I make no distinction between anyone who neglects or abuses a child regardless of their sexual orientation. I trust people will accept my explanation and my apology.”

DUP leader and First Minister Mr Robinson stood by Mr Wells, saying “I think anybody who looks at the comments will recognise that on a better day Jim would never have made such a comment”.

Mr Robinson said that his apology was “sincere” and “fulsome”. “He very rightly says it is neither his view or is it the Democratic Unionist Party’s view.”

His apology however failed to halt the flood of criticism. Alliance leader David Ford said the comments exposed a “deep vein of homophobia and disrespect for the LGBT community which runs throughout the DUP”.

Ulster Unionist Party leader Mike Nesbitt did not call for his resignation but told the BBC; “If the real Jim Wells is reflected in [his] comment I do not have any time for Jim Wells to be the Minister for Health.”