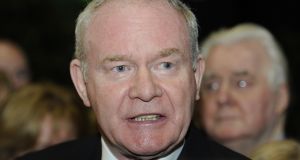 Northern Ireland Deputy First Minister Martin McGuinness: said the issue was a “non-story”, since the report’s warnings were well-aired during the campaign. Photograph: Dave Meehan

The Democratic Unionist Party (DUP) blocked the publication of an official report before last June’s Brexit referendum, which warned about the implications Brexit would have on Northern Ireland.

The report in May, by officials from the then Office of First Minister and Deputy First Minister, identified 20 risks an EU exit could pose for the North’s economy, foreign direct investment, jobs, and raised concerns it could create political instability.

The failure to publish the document, according to the Alliance Party and the SDLP, proved that the DUP and Sinn Féin are now “running the most secretive government in the history of devolution”.

Alliance Party ministers in the last Northern Executive – David Ford and Stephen Farry – said they were not consulted about the 15-page report, which could “have changed some minds” if it had been published, said Mr Ford.

The SDLP’s Sinéad Bradley said: “Burying a civil service report on Brexit until after the referendum was a clandestine attempt to skew the public debate and should never have happened. That Martin McGuinness allowed the DUP to get away with holding it back reveals the extent of his impotence within this coalition,” declared the party’s economy spokeswoman.

But, Mr McGuinness, speaking to the BBC at the British Labour Party conference in Liverpool, said the issue was a “non-story”, since the report’s warnings were well-aired during the campaign. The Northern Ireland Assembly speaker Robin Newton was also asked on Tuesday to examine Hansard to determine if the Assembly was misled by the absence of the report.

Mr McGuinness indicated the paper was not released as it was blocked by the DUP. Reports from their office are only made public with the agreement of Arlene Foster and Mr McGuinness.

A DUP spokesman said it was 15 pages, with three pages dedicated to the North “so the notion it was some sort of comprehensive document” did not stand up.