Denis Walsh: ‘How come the gardaí did not join up the dots sooner?’ 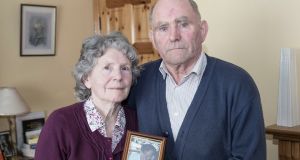 Mary and Denis Walsh from Caherdavin, Limerick, with a photo of their son Denis who went missing in 1996. Photograph: Liam Burke/ Press 22

As Easter Sunday, April 7th, 1996, drew to a close, the evening’s sun cast a shadow over Inis Mór, off Galway Bay, as the ocean tide carried the body of an unidentified young man onto the island’s rocky shoreline.

The unclothed remains were recovered by gardaí near Kileaney on the largest of the three Aran Islands shortly after 5.15pm, after they were alerted to the shore by a female tourist who had been out walking.

The body was no longer fully intact. Some parts were missing and others were decomposing. Without clothes, ID documents or tattoos, there was little to help gardaí identify the body.

There are just two press cuttings about the grim discovery of a man with “neatly cut brown hair” – one in the Tuam Herald (April 13th, 1996), and another in the Evening Herald (April 9th, 1996). Besides that, there was little publicity.

Last week, two gardaí called to Denis and Mary Walsh’s home, in Caherdavin, Limerick, informing the elderly couple that the remains belonged to their son, Denis jnr, who had gone missing a month before the grim find.

The couple’s immediate shock was soon coupled with confusion. Denis Walsh jnr (23) had been reported missing to gardaí at Mayorstone, in Limerick, on March 9th, 1996, less than a month before the find on Inis Mór.

The couple had travelled to Galway the day before. For all of the false leads they followed in the years since, it is this journey to Galway on April 6th, 1996, that pains most.

“We had been travelling around again with the flyers and we decided we’d pull into Gort Garda station [that day], so I dropped in a flyer. They asked me for a few extra ones because they were covering four other outlying stations,” says Denis Snr.

The couple returned with flyers to Galway little more than a month later, the day before Limerick gardaí appeared on the RTÉ Crimeline programme, appealing for information about their missing son.

By then, his body had been in the mortuary of University College Hospital Galway (UCHG) for weeks: “There was no connection made, as far as we can see,” the dead man’s brother, Paul, says today.

“How come the gardaí at the time did not join up the dots sooner? Did no garda in Galway check what people were reported missing around that time, and was no garda in Limerick aware of a body being found in Galway? I’m not satisfied,” Denis Walsh snr says.

Described as sensitive and kind, Denis Walsh jnr was a skilled sportsman

A Garda letter to the family this week has explained that the remains were “taken by boat to the mainland” on April 8th, 1996 “and brought to the mortuary at University College Hospital in Galway for a postmortem”.

DNA samples were checked three times in the years since by the forensic science laboratory – in July 2008, March 2011 and June 2017, but with no success. However, they were checked again in recent weeks.

Due to advances in DNA science, this time a match was made with samples taken years before from Denis’s parents. On February 5th, Mayorstone gardaí in Limerick were notified that a match had been made.

His body remained at the UCHG mortuary until 2014, “when the coroner gave permission for the burial of the remains in a communal grave in Bohermore Cemetery in Galway”, the Garda letter explains.

Separate to this, a Garda spokeswoman told The Irish Times: “The burial, in a county council graveyard, was arranged by University Hospital Galway following consultation with the coroner.”

Galway west coroner Dr Ciarán MacLoughlin says, “There will be an inquest and relevant information will be available then”, but that it was “a matter for the gardaí first to prepare a file”.

Now, the Walsh family want to know whether or not Limerick gardaí were aware at the time that Galway gardaí had recovered a body and had Galway gardaí known that a Limerick man was missing. And if not, why not?

Gardaí have yet to respond to these queries. On Thursday, the Walsh family met gardaí and asked to see the file on the recovery of Denis’s remains. However, a fire in Salthill Garda station some years ago destroyed some documents.

The Garda letter, signed by a senior Limerick garda, acknowledges the Walsh family have been left “with lots of justifiable questions on how it took so long to identify Denis”.

A retired garda who was called to the scene at Kileaney in 1996 has passed on his contact details to the Walsh family should they wish to speak to him, the Irish Times has learned.

The body of Denis Walsh was “treated with dignity, the body was blessed, and a doctor attended the scene”, the family have been assured.

The family have sought the postmortem report, and are in the process of seeking permission to exhume Denis’s remains, in order to lay him to rest in his native Limerick.

Gardaí said “foul play was not suspected” and that “with all sudden or unexplained deaths, a coroner’s inquest must take place”. However, this could take up to seven months because of backlogs caused by the pandemic.

Described as “sensitive and kind”, Denis Walsh jnr was a skilled sportsman, his family say, once called up to the Munster U-19s rugby squad, and lining out for Shannon RFC, Na Piarsaigh GAA, and Caherdavin Celtic.

However, sport and college ambitions fell away after he returned “a completely changed person” from a post-Leaving Certificate working holiday in Holland, after suffering a psychotic reaction when experimenting with drugs for the first time.

Diagnosed with bipolar in 1991, he was admitted to a psychiatric hospital after suffering an episode at a music concert: “It was like talking to someone else. Before he went away he had a very calm personality, but when he got very ill it was hard, we were always wondering what was Denis going to do, we had no control over it,” said Denis’s mother, Mary (82).

“We were very close, and he would come into the house at night and he would look for me to have a chat and he would tell me he was struggling. He tried so hard, he really did try hard, but he would end up crying when he was not on his medication, he was looking for help.”

The family did their best to cope. There were brief periods when calm was restored and the boy who was once there returned, but such moments were short lived.

Speaking to The Irish Times at their home in Caherdavin, Mary, Denis snr, and their sons Mike (50), and Paul (57) remember a day in 1995 when Denis jnr had to be pulled back from the brink from the sea at Salthill.

More psychiatric hospital admittances followed. “It was a constant strain,” Denis snr says, his voice trembling with grief. The loss has broken their parents, say their sons, as they try to organise a visit now to his Galway grave.

Previously, his father had gone to every Limerick hurling match, but he stopped: “I used to go to all the matches, but then I was going into town five nights a week scouting around looking for Denis,” he says.

Holidays were stopped, lest he come “walking back in the door” while they were away: “We haven’t put up the decorations since Denis left because he used to love doing that and dressing up the tree,” says his mother.

Remembering that there was “something strange” in her son on the day he went missing, she says he “went out and then he came back in and he just said goodbye, and he never said it like that before, it was very ‘final’. I told him I was making his favourite dinner – bacon and cabbage. I haven’t made it since.”