Cruise ship adrift with up to 4,500 aboard hit by engine failure 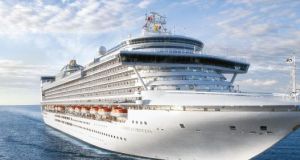 A large cruise ship with almost 4,500 people on board was adrift for nine hours in the Irish Sea due to engine failure.

The 290m-long (950ft-long) Caribbean Princess was forced to abandon a scheduled visit to Dublin Port this week, due to the seriousness of the incident which occurred 25 miles southeast of the city off the Wicklow coast on Wednesday.

The 17-deck-tall “grand class” ship eventually regained power in the evening and made its way to Belfast port, where it berthed early on yesterday morning.

Holyhead Coast Guard despatched a tug and helicopter to the ship, which had 3,306 passengers and 1,158 crew on board when it lost power in British waters.

The ship was en route from Cobh in Cork to Dublin as part of a 12-day cruise that left Southampton on July 31st.

The Irish Coast Guard’s Marine Rescue Co-ordination Centre monitored the incident and tasked the Dublin-based Sikorsky helicopter to fly over the vessel.

It is understood the incident was initially treated as a potential security alert,due to fears of a terrorist incident at sea. However, Princess Cruises, the US company that runs the vessel, said it was “never considered to be anything other than a technical glitch”.

The company said in a statement to The Irish Times that all guests and crew are “safe and secure”, and confirmed the ship did not lose total power, as air conditioning,lighting, galleys and toilets continued to function.

It said its fleet technical experts, working in collaboration with the captain and chief engineer on board, had restored propulsion just before 5pm on Wednesday. Technical and electrical engineering experts had been deployed to meet the ship in Belfast. The impact on the remainder of the ship’s itinerary was “not yet known”.

However, it said guests who had booked shore excursions from Dublin Port through the company would “automatically receive a refund to their shipboard hotel folio”.

The company attributed the loss of propulsion to a “glitch in the electrical system in the engine room”.

Marine rescue experts said the ship was fortunate an easterly wind was not blowing at the time, as this could have caused the liner to ground off the Wicklow or Dublin coast.

The ship has visited Irish ports before, berthing in Dublin last year, and is scheduled to make 10 visits to Cobh in Cork harbour this year.