Mass cull of 120,000 mink in Ireland was not carried out despite urgent recommendation 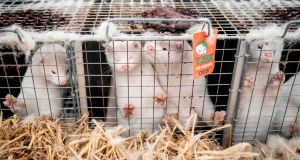 The outbreak on Danish farms has shut down mink farming until at least 2022. Denmark ordered the slaughter of up to 17 million mink in early November. Photograph: Mads Claus Rasmussen/AFP via Getty Images

There is no longer an “ongoing concern” in Ireland about a mutation of the coronavirus associated with mink, the chief medical officer, Dr Tony Holohan, has said.

Dr Holohan had recommended a cull of all Irish mink “as a matter of urgency” in a letter to Minister for Agriculture Charlie McConalogue in November, but he said he is no longer recommending the move as he believes the variant has been contained.

A mass cull of the 120,000 animals on Ireland’s three mink farms did not take place. However, due to normal farming practice the numbers have “significantly reduced” in recent months, according to the Department of Agriculture.

Fur Europe, the association representing fur farmers across the European Union, said roughly 20 per cent of a farm’s population is typically kept on as breeding stock, with the rest of the animals killed for their fur usually by mid-December.

The chief medical officer’s call came after coronavirus outbreaks occurred on farms in Denmark and a number of other countries. A mutated version of the virus associated with farmed mink was found in a number of humans in Denmark, prompting authorities there to order a cull of its entire mink population. There is no evidence of infection in mink in Ireland, a spokesman for the Department of Agriculture said.

He went on to say the Department “immediately responded” to the Health Department’s request and is undertaking regular surveillance of the animals. He said the request is being “actively advanced” but gave no explanation as to why a mass cull was not urgently carried out.

The HSE has engaged with workers on the farms in Donegal, Kerry and Laois regarding health screening to “ensure there is no current public health risk and to mitigate the risk of any such development”, the spokesman said.

At a National Public Health Emergency Team (Nphet) briefing on Thursday, Dr Holohan said the recommendation he made in November followed a risk assessment in response to the mutated strain discovered in Denmark. He said he now believes containment measures put in place by Danish authorities have been “successful in containing the variant”.

“The cull was focused, as it was in other countries, on taking containment measures at the time,” he explained.

When asked if he still wished for the cull to be carried out he said: “I haven’t continued to recommend that.”

Dr Holohan said Nphet is now concerned with emerging Covid-19 strains such as the Brazilian and South African variants.

The outbreak on Danish farms has shut down mink farming until at least 2022. Denmark ordered the slaughter of up to 17 million of the species in early November. The move proved politically disastrous for the government there, with a cabinet minister forced to resign after it emerged the cull had no legal basis. Millions of the mink that were culled had to be dug up from mass graves and incinerated after some of those buried resurfaced.

A commitment was made in the programme for government to phase out fur farming in Ireland.