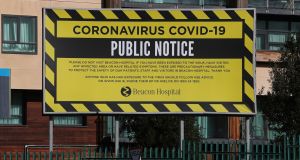 A billboard at the Beacon Hospital in Sandyford, Dublin. Photograph: Nick Bradshaw

The head of the Beacon Hospital in Dublin has indicated an agreement with the HSE on the supply of extra bed capacity could be signed imminently, so long as hospital management can remain in charge.

“Once we are able to control our own hospital we are more than happy to sign the HSE agreement,” chief executive Michael Cullen said on Monday.

On Saturday it emerged the Beacon was alone among 18 private hospitals in not signing up to the so-called Safety Net Agreement granting the HSE additional hospital capacity as it continues to battle Covid-19 and rising infection rates.

HSE chief executive Paul Reid expressed his “extreme frustration” that the Beacon had not signed up to the agreement. “We have our public health system facing the biggest crisis probably in the history of the State,” he said.

Mr Cullen told the Today with Claire Byrne show on RTÉ on Monday that he was disappointed by Mr Reid’s comments, particularly as the Beacon is already caring for public patients in surgery, diagnostics and intensive care.

He said the issue at hand was “our need to be able to have operational control”, explaining that during the initial virus outbreak last year, the Beacon was left running at just 30 per cent of capacity.

“This was never about money. This was the fact that we had a facility which is geared up to operate at full capacity and we were only able to treat 30 per cent of the patients who would normally be treated,” he said.

Mr Cullen said hospital management were continuing to read over a revised contract sent by the HSE late on Sunday and was hopeful an agreement could be reached. Having sought some clarifications, they are due to meet the HSE, he said.

With 180 inpatient beds generally, the hospital expects to be running at 95 per cent capacity on Monday night, and its intensive care unit at full capacity.

An earlier statement released on Saturday pointed out that it was already treating more public patients than the HSE agreement requested, and more than any of the other 17 private hospitals.