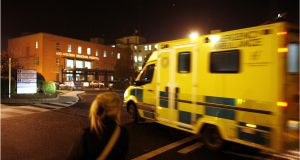 A teenager remains in a critical condition in a Cork hospital after consuming a synthetic drug at a house party in Cork city. File photograph: Dara Mac Dónaill/The Irish Times

A teenager remained in a critical condition in a Cork hospital on Friday night after consuming a synthetic drug at a house party in Cork city on Tuesday morning.

The 18-year-old, from Millstreet, Co Cork, was one of six people who took ill after consuming a powdered form of a psychedelic phenethylamine called 2C I at the party at St Patrick’s Terrace in the Greenmount area of the city.

Those who consumed the substance by ingesting it subsequently recovered.

However, it is understood the 18-year-old consumed the drug by snorting it.

He remained critical but stable in the hospital’s intensive care unit on Friday night.

The incident has led the HSE to issue a warning that the 2C family of drugs are all highly dangerous.

The warning covers 2CP, 2CB, 2CI and its derivative 25I-NBOMe, which are known by a variety of street names, including N Bomb, Smiles and Solaris.

The drugs can be sold in liquid, powder and tablet form and are consumed at parties or clubs for their stimulant and aphrodisiac effects.

The HSE said the drugs can have serious side effects, including paranoia, hallucinations, gastrointestinal effects and kidney problems.

The HSE said: “Young people are advised that there is no quality control on these drugs.

“There are problems with purity and contaminants, and there is no way of checking that what is purchased or consumed is the intended substance.

“Given the serious side effects experienced by the young people in Cork, the HSE addiction services are issuing a warning about possible contaminated ‘party pills’ and advise people not to consume any unknown substances that they are offered at this time.”

Gardaí are to prepare a file for the Director of Public Prosecutions (DPP) after arresting and releasing without charge a 28-year-old man suspected of supplying the substance to those at the Greenmount party.