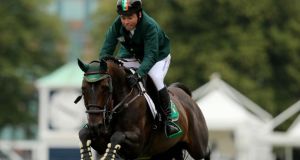 The feelgood factor returned to the RDS stands in Dublin with Ireland’s first Aga Khan Trophy win in three years.

The crowds clapped and cheered after the Irish team’s emphatic victory against some of the best showjumping teams in the world.

It brought a sense of a new era in Irish showjumping. A special cheer was reserved for Bertram Allen, who turned 20 last week and rode a horse, Romanov, only three years younger than him.

At the end, a slow trot turned into a gallop as the triumphant team paraded around the arena with the gold trophy and €64,000 prize.

Minister of State for Tourism and Sport Michael Ring was among the first to congratulate them. “Ireland has a great equestrian tradition and a great love of the Aga Khan Trophy.” It is “a wonderful way to start the weekend”.

The FEI Nations Cup was not without dramatic moments. The lowest fence was the biggest hurdle for a couple of experienced riders. Last year’s winners, the United States, were in a good position when Charlie Jayne’s horse Valeska unseated him and sent him head first into the water at the water jump. Switzerland’s chances evaporated when Olympic champion Steve Guerdat’s horse Corbinian refused at the same place.

Among those watching was Eddie Macken who represented Ireland 27 times in the Nations Cup. “I know what Friday in Dublin is all about,” he said.

Based in Vancouver, Canada, as a trainer, Macken relishes visits home, although his tan gives an indication as to why he is not inclined to move back permanently. “I get to follow the sunshine,” he says.

Macken hopes the Irish team can become the household names he and his contemporaries used to be, but he acknowledges the competition is much stiffer today.

“Back then we didn’thave all that fantastic coverage of sport on TV. When I was a kid, the highlight of the summer was to wait for the Horse of the Year show in Wembley to be televised.”

President Michael D Higgins, who was at the show with his wife Sabina, also offered his congratulations.

“The Irish team had the full support of a most enthusiastic Irish crowd, who greatly enjoyed . . . the determination and skill.

“I wish this most exciting and talented Irish team every success in the years ahead”.

Covid-19: RCSI transfers operation of Dundalk nursing home back to provider 09:39
‘Ireland should take calculated risk’ in greater easing of Covid-19 restrictions 09:41
Broadband plan worth €3bn might be delivered in five years instead of seven, Dáil told 08:00
Cash haul of €700,000 linked to veteran trafficker 'The Penguin' 06:43
New HSE figures reveal the toll on care homes 06:07