Businesses in Athlone and Blanchardstown given food enforcement orders 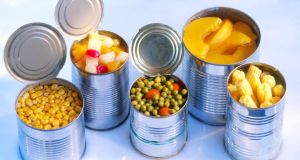 The prohibition order for Alimentara Transilvania was in relation to a white lorry used by the store which contained 144 tins of cheese, 62 bags of pickled cabbage and 31 bags of frozen pork of unspecified origin.

Two businesses were issued with food enforcement orders in March, according to the Food Safety Authority of Ireland (FSAI).

Millars Restaurant in Ballydangan, Athlone, Co Roscommon was the subject of a closure order, while the Alimentara Transilvania grocery store in Coolmine, Blanchardstown was handed a prohibition order for unlabelled pork products.

The closure order for Millars Restaurant was issued by the HSE on March 19th, and was lifted five days later. The prohibition order for Alimentara Transilvania was in relation to a white lorry used by the store which contained 144 tins of cheese, 62 bags of pickled cabbage and 31 bags of frozen pork of unspecified origin.

It was the first such order to be handed out this year.

“While most food businesses are committed to high standards for the health of their customers, this is not always the case,” said FSAI official Bernard Hegarty.

“We’re urging food businesses to make sure that they have a food safety management system in place and that it is consulted and updated on a regular basis to ensure non-compliance issues and breaches of food safety legislation do not occur,” he added.

This month’s orders bring the total number of closures to 17 so far this year, including the temporary shutting-down of a coffee dock at Our Lady’s Hospital in Navan last week after the discovery of a rat on the premises.

Last year was the second worst on record for food enforcements, as a total of 113 were issued following a peak of 144 in 2013.

Documents released by FSAI in December revealed health and safety breaches in various food establishments, including the presence of dead rats, sewage and bags of cows’ skin in pubs and restaurants.

The authority also saw a marked increase in complaints by consumers last year, some of whom found objects such as dead maggots, a wire and a razor blade in meals and products.