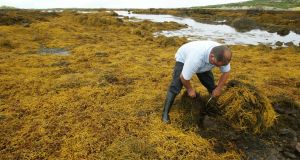 Taking a coastal stroll makes one feel better, but it’s not just the fresh air that lifts the spirits. Newly-published research has found breathing iodine emitted by seaweed has physiological benefits.

The research published in the Irish Medical Journal says iodine intake, which is essential to brain development in children, is improved by continued exposure to a seaweed-rich environment.

The two-decade study, led by Prof Peter Smyth of both University College Dublin (UCD) and NUI Galway, was sparked by his interest during his time in UCD medical school in iodine deficiency and its effect on the thyroid gland.

Research in the 1940s in south Tipperary had linked large goitres and associated learning difficulties in children with iodine deficiency.

Ireland and Britain lack the salt iodisation programmes introduced in other developed countries to ensure diets of expectant mothers are not iodine-deficient. “Seaweed shares properties with the human thyroid, in that both concentrate iodine; the thyroid from the diet, seaweed from seawater,” Prof Smyth says.

His study over 20 years compared urine samples taken from schoolchildren and women in three separate environments: the seaweed-rich coastal area of Carna, Co Galway; the coastal cities of Dublin, Galway and Belfast; and the inland areas of Dungannon, Co Tyrone, and Mullingar, Co Westmeath.

The seaweed “hotspot” of Carna scored highest of all, with 45.6 per cent of schoolchildren and 43 per cent of adults having iodine intake above the World Health Organisation (WHO) recommendation. Between 2.3 per cent and 16 per cent of those tested in inland and low seaweed-abundant coastal areas met the WHO standard.

“The benefits are associated with not just being near the sea, but being able to take a good lungful of air near a seaweed-rich beach,” Prof Smyth says.

The findings may prompt local authorities to think twice about regularly clearing city beaches of seaweed.

In Galway, an estimated 60,000 people visited the third national SeaFest over the weekend.