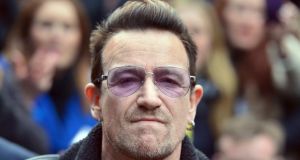 A cycling incident in which Bono was injured happened in New York on Sunday when the singer swerved to avoid another cyclist and fell over. Photograph: Anthony Devlin/PA Wire

Injuries Bono sustained in a cycling incident in New York this week would appear to be a lot worse than first suspected.

When the U2 singer crashed his bicycle in Central Park on Sunday, the band released a statement saying he had injured his arm and required surgery.

However, a new statement from the Presbyterian/Weill Cornell hospital reveals that he broke the distal humerus (long bone in his arm) in six places, and the fall was so bad that the bone protruded through his skin.

His injuries were severe enough that he needed three metal plates and 18 screws inserted in an operation which took five hours.

In addition, Bono fractured a bone around his eye socket, his left collar bone is in three pieces - and he also broke the little finger on his left hand.

The incident happened on Sunday when the singer swerved to avoid another cyclist and fell over.

The immediate effect of the fall was that U2 cancelled their week-long residency on the US TV programme Tonight Show with Jimmy Fallon to promote their new album, Songs of Innocence.

“It looks like we will have to do our Tonight Show residency another time - we’re one man down,” the band announced on their website.

The band had already begun pre-planning their world tour around the Songs Of Innocence album, but the extent of Bono’s injuries has put back preparation for that tour.