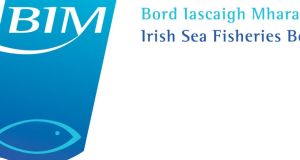 Bord Iascaigh Mhara (BIM) says that aquaculture will be central to its new five-year plan for Ireland’s seafood sector which aims to meet a target of €1 billion in sales and 1200 jobs by 2017.

Bord Iascaigh Mhara (BIM) says that aquaculture will be central to its new five-year plan for Ireland’s seafood sector which aims to meet a target of €1 billion in sales and 1200 jobs by 2017.

BIM chief executive Jason Whooley said the State fisheries board was making “no secret” of the fact that it would plan more fish farms similar to that proposed for Galway Bay if that project was approved by Minister for Marine Simon Coveney.

With Europe’s second largest sea area, Ireland is in an ideal strategic position to meet a surge in global demand for “high quality seafood”, particularly among the growing middle class in China, Mr Whooley said today.

Chinese consumption of seafood has grown from 7 kilo per head in 1995 to a projected 36 kilo per head by 2030, and China became a net importer of fish for the first time in 2011.

Europe is also importing 62 per cent of its fish, and so finding new sources of raw material is “critical”, Mr Whooley said.

An increasing world population means that the global requirement for fish may rise by an additional 42 million tonnes annually by 2030.

“We have the raw material to our west and the market to our east,”Mr Whooley said.

New species like boarfish offered opportunities, and adding value to existing species subject to quota was essential, he said.

BIM aims to establish new third-level partnerships, as part of its focus on maintaining quality in the seafood sector.

The partnerships with University College Cork (UCCC) and Letterkenny Institute of Technology will focus on training graduates in areas like business management and food science and placing them with seafood companies, Mr Whooley said.

It also aims to develop international “strategic partnerships” and to create “scale” within the Irish sector. It aims to help four Irish companies, among 180 registered here, to generate a turnover of over €50 million by 2017. Most of the existing companies are small-scale, often family-run, with a turnover ranging from €3 million to €10 million.

BIM aims to produce over 45,000 tonnes of additional raw material during the five year period from 2013-2017, and would aim to ensure Irish seafood exports reach 650 million euro, Mr Calnan said. Irish farmed salmon would be a “key target growth area”, he said.

Mr Coveney is still considering the BIM application for a 15,000-tonne organic salmon farm in Galway Bay, which has attracted a large number of submissions, including one from Inland Fisheries Ireland which is opposed to the project.

* Third-level partnerships with UCC and Letterkenny IT.