Berkeley victim’s mother: ‘Those kids should be alive today’ 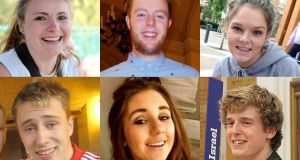 The mother of one of the six students killed in the Berkeley balcony collapse has spoken publicly for the first time, urging legislators in California to pass a measure she believes would prevent such a tragedy from happening again.

Jackie Donohoe, who lost her daughter Ashley (22) in the balcony collapse, gave emotional testimony to the assembly business and professions committee of the Californian legislature, asking local politicians to compel building companies to disclose deals made privately to settle faulty construction claims.

She told the committee that the collapse would not happened had the state’s building industry regulator known about previous defect settlements involving the California company that build the apartment block in downtown Berkeley.

“That balcony should have not went down,” Mrs Donohoe told the committee in Sacramento, California’s state capital.

“My daughter and the rest of these kids should be alive today.”

Mrs Donohoe is originally from Dublin and now lives in Rohnert Park, California, north of San Francisco. Her daughter was a dual Irish-US citizen.

It emerged after the tragedy that Segue Construction, the California firm that built the Library Gardens apartment block at 2020 Kittredge Street where the accident occurred in June 2015, had paid out $26 million (€23 million) to settle legal actions relating to construction defects over the previous three years.

Members of California’s State Contractors Licence Board, which regulates the building industry, has said that it would have started an investigation into suspending or revoking Segue’s license had it known of the firm’s legal history.

“We never want to see another family go through the pain and suffering that we’re going through,” said Ms Donohoe, who also lost a niece, Olivia Burke, a J1 student from Dublin, in the fatal balcony collapse.

Four other Dublin students, - Niccolai Schuster, Eimear Walsh, Lorcán Miller and Eoghan Culligan - were killed when the balcony collapsed during a 21st birthday party. Seven Irish students were badly injured in the accident. The students were in California for the summer on popular ‘J-1’ work visas.

“I don’t want this to happen to anyone else,” Mrs Donohoe told the committee yesterday. “How many more balconies have to come down in California?”

Her testimony helped the proposed legislation pass the committee by a unanimous 12-0 vote, almost a year after it stalled at committee level.

Under the bill, companies would be required to notify the state licensing board when they are convicted of felonies or other crimes in connection with their work.

Democratic state senator Jerry Hill proposed that state agencies study how to improve balcony standards and whether to publish information about construction malpractice.

Building industry associations are lobbying California lawmakers not to include the study or force companies disclose settlements arguing that legal actions are often settled to avoid costs and do not involve wrongdoing.

“The reason why the industry does not want these reforms to go through is that so they can do secret settlements and hide negligent construction when they get caught,” said Mrs Donohoe.

“If someone had have done the right thing, our kids would be alive today. I firmly believe that.”

Investigators concluded that dry rot caused by water intrusion into the balcony’s supporting beams under the concrete floor led the deck to collapse.

Irish consul general in San Francisco Philip Grant, who travelled to Sacramento for yesterday’s hearing, called the balcony “a death trap” in an interview with a local Fox News reporter. He spoke of the interest of the Irish Government and people in seeing legal changes in the aftermath of the tragedy.

“They’re very determined even at the distance that there is to try and encourage members of the legislature to take the steps necessary so that accidents and tragedies like this won’t happen to any other family in the future,” he said.

The Donohoe family first called for changes to California’s laws weeks after the accident to prevent similar accidents happening again.

“I’ll never get my daughter back,” she said. “We fail these kids by allowing this to happen.”