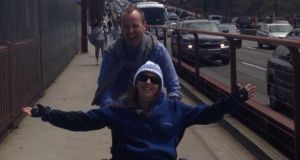 Berkeley survivor Clodagh Cogley and her father on the Golden Gate Bridge in San Francisco shortly before they left the US for Ireland.

Clodagh Cogley, one of the survivors of the Berkeley balcony collapse, is expected to be able to return to her home in Dublin soon.

An update on the Clodagh Cogley Fund Facebook page said plans are well under way for adapting the family’s house “to welcome Clodagh home in the near future and for anticipating some of her longer term needs”.

Ms Cogley (21) arrived back in Ireland at the start of August after been treated for her injuries for six weeks in San Jose, California.

She had been receiving treatment at the brain and spinal cord injury rehab facility in the Santa Clara Valley Medical Centre after suffering extensive damage to her ribs, lungs and spine. The tragedy claimed the lives of six students and seriously injured seven others.

A third-year psychology student at Trinity College, Ms Cogley is from Milltown in south Dublin, and is the daughter of TV3 director of broadcasting Niall Cogley. She is also the grand-daughter of legendary rugby commentator Fred Cogley.

The Facebook update includes a photograph of Ms Cogley and her father on the Golden Gate Bridge in San Francisco, which was taken shortly before they left the US for Ireland.

Crossing the bridge was one of Ms Cogley’s objectives before leaving California, according to the update.

The post thanks medical staff, friends and supporters and says they are “hopeful that Hannah, Niall and Aoife will continue with their recoveries and will soon be able to get home too”.

Hannah Waters, Niall Murray and Aoife Beary remain in Santa Clara, while Seán Fahey, Conor Flynn and Jack Halpin have already made their way back to Ireland.

The post says: “Our dear departed friends who were not so fortunate to survive the fall on June 16th are constantly on our minds as are the bereaved families and friends of Niccolai, Eoghan, Ashley, Lorcán, Olivia and Eimear who remain with their unfathomable grief and with their treasured memories.”