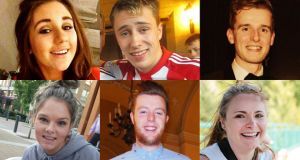 The families of four of the Irish students killed in Berkeley who are arriving into Dublin on Sunday praised the students in the apartment on the night, describing the way in which they acted as “faultless.”

In a statement, the families of Eoghan Culligan, Lorcán Miller, Niccolai Schuster and Eimear Walsh, who are all from Dublin, thanked everyone in the US and Ireland for their sympathy and support, saying that it had been “a tremendous comfort to us at this tragic time.”

“We cannot thank enough the students that were in the apartment and apartment complex that night,” he said.

“The manner and speed at which they reached out to our families to our consul, and to each other was faultless. Our children were extraordinarily blessed in their friends and we are enormously proud of them.”

The four young Irish men and women along with fellow students Olivia Burke (21) from Dublin and Ashley Donohoe (22), an Irish-American citizen of Dublin parents, died when the fourth-floor balcony they were standing on collapsed at an early-morning party on Tuesday.

The Culligan, Miller, Schuster and Walsh families said their thoughts and prayers were with the seven students - Aoife Beary, Clodagh Cogley, Conor Flynn, Hannah Waters, Jack Halpin and Niall Murray - who were injured in the balcony collapse and who remain in hospital in California. “We wish them a speedy recovery,” they said.

The four families said that the sympathy and responses of friends of their children, the wider group of J-1 students and the programme’s sponsoring agencies is “a testament to their popularity, and to the closeness of these groups from school and university.”

Returning to Dublin on Sunday morning on an overnight flight from San Francisco, the families asked for privacy.

“We very much appreciate the support and sympathy that has been expressed, but now we ask for privacy so that we can mourn the sudden and tragic passing of our beloved sons and daughters, with the dignity that they deserve,” the families said in the statement.

The arrival of the remains of the deceased and their families at Dublin Airport will be private.

Speaking for the first time publicly in a statement, the four families said that they wanted to thank in particular the local authorities, emergency services, medical staff, parishes and communities of Berkeley. They singled out Ireland’s consul in San Francisco, Philip Grant, and his local team for particular praise.

Aer Lingus, the Department of Foreign Affairs, the Irish Ambassador to the US Anne Anderson were also thanked and Minister of State for the Disapora Jimmy Deenihan, who flew into California on Thursday, was also given “a special appreciation.”

They thanked the Irish communities of the San Francisco Bay Area, co-ordinated by Fr Brendan McBride, Fr Aidan McAleenan, Celine Kennelly and their colleagues at the Irish Immigration Pastoral Centre, saying they had been “a constant source of support and comfort.”

Berkeley mayor Tom Bates has said that the beams supporting the balcony at the Library Gardens complex in downtown Berkeley may have been weakened by water damage.

City officials are still investigating the cause of the accident. The seven broken supporting beams on the building, which appear to have rotted, have been covered up by plastic sheeting.