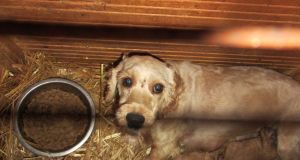 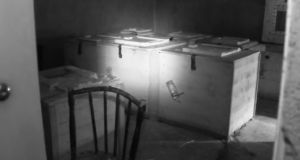 Still from a BBC Panorama investigation into the puppy trade showing containers in a Co Cavan breeding establishment. 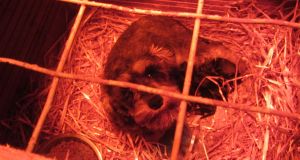 The ISPCA has welcomed a BBC investigation that looked at the illegal export of Irish puppies to the United Kingdom.

The Panorama report used secret filming to track the supply chain of dogs into and around Britain.

One of the farms featured in the programme was in Co Cavan where footage showed female dogs that had just given birth, or that were about to, being kept in wooden crates – an illegal practice.

In a statement, the ISPCA said it had raised concerns about the conditions at the premises in Co Cavan, one of the biggest licensed farms in Ireland, in November 2015.

“As a result of information received from our colleagues in the Scottish SPCA, ISPCA Inspectors visited Cullivan’s premises and were shocked at the conditions,” the organisation said.

“We demanded that Cavan County Council take enforcement action without delay against Cullivan and to confirm that the crates were no longer being used. However, Cavan County Council failed to respond and we raised the matter with the Veterinary Council of Ireland who asked the Department of Environment for more resources to allow Inspections and enforcement action to be taken.”

It added: “The ISPCA also submitted a Freedom of Information request to Cavan County Council asking for details of inspections at this site, details of any breaches of the DBE Act and details of enforcement action taken. Our FOI request was denied on the grounds that that the information may contain ‘trade secrets’ and ‘commercially sensitive information’”.

The ISPCA, which seized more than 400 dogs from breeding establishments in 2015, said it hoped the BBC programme would result in immediate action by the county council as well as other councils across the State.

Cavan County Council said: “In light of the Panorama programme this matter is currently under review and we will not be issuing any further statements.”

It had told the BBC that it had inspected the dog breeding establishment featured in the programme, which is registered to keep up to 300 females, as part of its registration process.

“Cavan County Council inspection frequencies are dependent on its dog breeding establishment risk assessment protocols. A total of six inspections have taken place over the last twelve month period, two of which have been joint inspections with Department of Agriculture, Food and the Marine Veterinary inspectorate,” the council said.