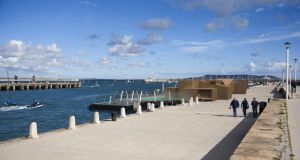 A planning application to develop a €2.5 million “urban beach” and outdoor swimming pool at Dún Laoghaire harbour has been lodged by Dún Laoghaire Harbour Company.

The plan, lodged with Dún Laoghaire Rathdown County Council just before Christmas, includes an artificial beach and cafe as well as a floating swimming pool with heated, treated seawater built on a converted river barge located beside a berth within the harbour.

The beach will be overlaid on the existing concrete structure of berth 1 at the East Pier in the harbour. Planned facilities alongside the beach include changing rooms, toilets and showers contained in eight single-storey “architectural modular pod structures”, according to the application.

The venture, which was published for consultation last August, is to be jointly funded by the harbour company and the council. The plan is open for submissions until February 3rd.

Local councillor Victor Boyhan (Ind) said the council remained fully committed to its own plans to redevelop the currently derelict nearby Dún Laoghaire baths into an urban beach.

“The general public have consistently, over many years, sought to have the old baths site reopen as a public amenity,” he said. “I believe the council’s plans to provide a seawater swimming facility is the best way to proceed.”