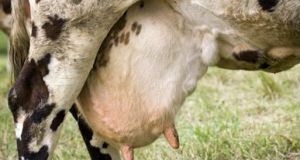 In one farm visited by department inspectors, 111 cows had had their cows docked, despite the fact the farmer was a certified member of a sustainable dairy assurance scheme, with animal welfare requirements, operated by Bord Bia. File photograph: Getty Images

The European Commission has told the Department of Agriculture to do more to stop farmers mutilating dairy cattle by docking their tails.

The commission says the department needs to raise awareness to prevent unnecessary pain and suffering to cattle from what has been described as “barbaric” mutilation.

The recommendation comes in an EU report which found a continuing though low incidence of non-compliance at Irish dairy farms with the prohibition on tail-docking.

In one farm visited by department inspectors, 111 cows had had their cows docked, despite the fact the farmer was a certified member of a sustainable dairy assurance scheme, with animal welfare requirements, operated by Bord Bia.

Farmers who had docked the tails of their cattle said they had done so for hygiene reasons and claimed they were unaware it was prohibited, the report says.

The report arises from an audit carried out by EU officials last February to evaluate the effectiveness of measures to ensure dairy cattle are not caused any unnecessary pain, suffering or injury.

The report concludes the measures in place generally ensure the welfare of cattle on dairy farms.

It says trends are improving in many areas, such as managing the occurrence of mastitis, lameness, and disease in calves.

EU directives require dairy farmers to take action where animals show signs of ill-health and to ensure good hygiene so the risk of disease is limited. Animals should also have room to lie down, rest and rise, and specific procedures have to be followed when mutilations are carried out.

The removal last year of milk quotas after 30 years is expected to trigger a drive towards greater efficiency through economies of scale in production, according to the commission. “This is a potential risk for animal protection standards.”

As a result, the commission’s health and food safety directorate decided to audit dairy farms this year to ensure cattle were not caused unnecessary pain or suffering and to collect information on the prudent use of antibiotics and other antimicrobials.

One-third of beef, dairy and calf-rearing farms inspected for animal welfare by the Department of Agriculture in 2014 were found not to be fully compliant, according to the report. Tail-docking was a prominent reason for non-compliance.

Farmers who dock tails usually suffer a 5 per cent deduction in the single farm payment for a first offence.

Two years ago, the first prosecution for bovine tail-docking resulted in a €4,000 fine for a Co Cork farmer.

A department vet who gave evidence described the practice as barbaric and said it has no scientific basis and leaves animals permanently disabled.

The practice involves applying a rubber band to the cow’s tail. The band causes severe pinching, cutting off blood supply, causing the death of the tail tissue.

It is often carried out to make milking easier.

Last year, there were 17,500 dairy farms in Ireland with an average herd size of 64 cows, or a total of 1.1 million dairy cows. Just more than half of farmers are aged over 50 years.

The dairy industry expects to increase production by 50 per cent by 2020, compared to levels under the milk quota system. By the end of last year, production was up 16 per cent, at 6.6 billion litres.

The Irish cow spends an average of 7.5 months a year on pasture.