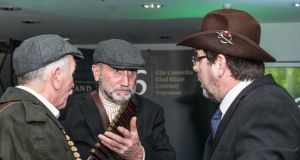 By contrast Trinity College was “almost denuded of students – it has done splendidly”.

The writer noted that many of those marching off to their lectures at the National University were probably the sons of farmers, a “class that has done so well under recent British legislation”. He concluded: “It would be more seemly to see these young men in khaki, helping in the defence of their mothers and sisters.”

On February 26th, 1916, the Germans shocked the world by announcing they had captured the key French position of Fort Douaumont. This was the biggest concrete structure in the world at the time, and a fortification on the river Meuse.

The raid on the barracks at Ashbourne was carried out by men from the 5th battalion (Fingal Brigade) of the Irish Volunteers. Military historian Paul O’Brien will give a lecture on the battle at Ardgillan Castle, Balbriggan, on Saturday, March 5th, at 11am. On March 6th, a Fingal Memorabilia Day will take place at the Bracken Court Hotel in Balbriggan. The public are invited to bring memorabilia along.

A re-enactment of the battle and a wreath-laying ceremony will take place on Easter Monday, March 28th. The other big ceremony for Fingal will be on Sunday, April 24th, when there will be a parade and the launch of a public arts project in Swords Castle. www.fingal.ie

Iarnród Éireann has launched its 1916 commemoration programme at Pearse Station. In 1966, the State renamed 15 stations on the rail network after the executed leaders of 1916 to mark the 50th anniversary of the Rising.

Sixteen display panels have been unveiled at Pearse Station, each of which will also go on display at the station named after each leader around the network. The displays feature a portrait of the leader by artist David Rooney as well as information about their lives.