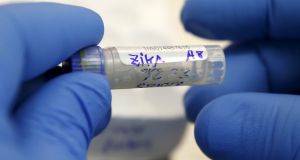 A health technician analyzes a blood sample from a patient bitten by a mosquito at the National Institute of Health in Lima, Peru. Two adults have been confirmed with the Zika virus in Ireland but are said to have fully recovered. Photograph: Mariana Bazo/Files/Reuters.

Two adults have been confirmed with the Zika virus in Ireland but are said to have fully recovered.

The cases — the first of their kind in the State — are unrelated to each other and both patients are now said to be well.

Both individuals have a history of travel to a Zika affected country, the Health Service Executive (HSE) confirmed.

“These are the first cases of Zika virus infection confirmed in Ireland,” a HSE spokeswoman said. “Neither case is at risk of pregnancy.”

The HSE said the newly-discovered Zika cases in Ireland are “not an unexpected event” as many other European countries have reported cases as a result of people travelling to affected areas.

Health chiefs have urged Irish people who fall ill within two weeks of returning from an affected area to seek medical help.

The news comes as the first known case of the Zika virus being sexually transmitted in the United States has been reported.

The US Centres for Disease Control and Prevention said a patient in Texas had been infected with the virus after having sexual contact with an ill person who returned from a Zika-affected country.

The virus is usually spread through mosquito bites, but investigators have been exploring the possibility it can also be spread through sexual contact.

The virus was found in one man’s semen in Tahiti, and there was a report of a Colorado researcher who caught the virus overseas and apparently spread it to his wife back home in 2008.

The possibility that the Zika virus causes microcephaly – unusually small heads and damaged brains – emerged in October, when doctors in northern Brazil noticed a surge in babies with the condition. About three million babies are born in Brazil each year. Normally, about 150 cases of microcephaly are reported, and Brazil says it is investigating nearly 4,000 cases.

Last week, Public Health England warned men in the UK to wear condoms for a month after returning from any of the 23 countries affected by Zika.

Ministers have insisted the risk posed by the spread of the mosquito-borne Zika virus to the public remains in Britain “extremely low”.

The World Health Organisation has declared an international emergency over the virus, which is linked to birth defects in Brazil and the Americas.