Wexford hospital: ‘Timing is everything with bowel cancer’ 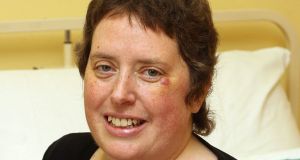 ‘We can’t have a system where people go so far with their cancers because timing is everything with bowel cancer,’ Susie Long’s husband Conor MacLiam said.

The husband of Susie Long, who died in 2007 after a late diagnosis of bowel cancer, has said any inquiry into Wexford General Hospital must pinpoint failures in the cancer screening system and find out how it happened.

Conor MacLiam was speaking on Thursday after it emerged that a review of missed cancers among patients who received colonoscopies at Wexford General Hospital has found a number of missed cancer diagnoses and a probable avoidable death.

He said the bowel cancer screening programme needs to be extended and structured so that what happened in Wexford can not happen again where you have misdiagnosis bringing up cases that are already too far gone.

The review, which has identified a small number of patients with cancer which was missed, is nearing an end and follows the recall last year of almost 600 patients who had colonoscopies in the hospital in 2013 and 2014.

“We can’t have a system where people go so far with their cancers because timing is everything with bowel cancer”, Mr MacLiam, who is also running as an AAA-PBP general election candidate in Carlow-Kilkenny, told Morning Ireland on RTE Radio 1.

“Since Susie died seven years ago €3 billion has been taken out of the health system and so we are constantly worried about these situations happening again,” he said.

Mr MacLiam said screen for bowel cancer has to be tackled in a comprehensive way. “It is good there is a checking system but my anxiety lies in the possibility the checks do not take place soon enough to actually save the lives of the people who are going through the programme”.

He said Susie had to wait seven months for her colonoscopie while she saw a friend of hers been seen within three days because he was on private health care. “Public patients deserve a proper health system that caters to the needs of the people. It can’t go on like this, where often we have chaos breaking out and people’s lives at stake”.

Minister for Health Leo Varadkar last night extended his sympathies to the families involved and “in particular to the family of the deceased”.

The Irish Times reported last May that up to 10 patients were reported to have interval cancers, which are diagnosed between screening examinations, and that the work of more than one doctor was being examined. On Wednesday RTÉ reported that the review has identified “about 12” missed cancers and the probable death.

The report into the matter is expected to be published by the end of March and will be given to the doctors involved for their observations.

Patients affected include those attending as part of the national BowelScreen programme and patients referred for colonoscopies by their GP because of their symptoms.

A spokeswoman for the East Ireland hospital group said the recall of all patients and the subsequent report and its findings were in the final stages. “Once the report has been signed off it will need to be sent to all referenced parties within it before it can be published. We have no further comment to make at this time.”

Mr Varadkar’s spokesman said the Minister had been briefed on the issue since early 2015 and was “concerned primarily that any cancers may have been missed”.

“The Minister is also concerned about the length of time the review has taken and is conveying to the HSE the need to improve quality assurance so that lessons can be learned and mistakes not repeated. He has been assured that there has been full open disclosure in these cases.”