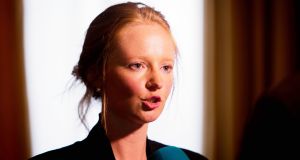 A woman carrying a foetus with a fatal abnormality was subjected to discrimination and cruel, inhuman or degrading treatment due to Ireland’ s abortion ban, the United Nations has found.

It called for the strict prohibition to be reversed, including reforming the right to life of the unborn in the Constitution if necessary, to allow women to voluntarily terminate a pregnancy safely.

The independent experts, from the Geneva-based Human Rights Committee, said Amanda Mellet was forced to choose between carrying her baby to term, knowing it would not survive, or travelling abroad for a termination.

The UN body also hit out at the Government for putting her through financial and emotional suffering.

Its report said she had to pick “between continuing her non-viable pregnancy or travelling to another country while carrying a dying foetus, at personal expense and separated from the support of her family, and to return while not fully recovered”.

The UN has ordered the Government to compensate Ms Mellet and ensure she gets the adequate psychological treatment she may need and to prevent similar violations from occurring. It has also told the Government to report to it within six months on the measures it has taken to comply with the decision.

Ms Mellet was 21 weeks pregnant in November 2011 when medics told her the foetus would die in her womb or shortly after birth.

She travelled to the UK for an abortion but had to return home 12 hours after the procedure as she could not afford to stay longer.

The UN committee said the hospital where she was treated did not provide any options regarding the foetus’s remains and she had to leave them behind.

Three weeks later the ashes were unexpectedly delivered to her by courier.

Ms Mellet filed a complaint with the UN over her experiences.

The human rights organisation said she was discriminated against by being denied bereavement counselling and medical care available to women who miscarry.

It said this did not take into account her medical needs and socioeconomic circumstances.

“Many of the negative experiences she went through could have been avoided if (she) had not been prohibited from terminating her pregnancy in the familiar environment of her own country and under the care of health professionals whom she knew and trusted,” the committee said.

The UN also noted the shame and stigma associated with the criminalisation of abortion of a fatally ill foetus.

It said Ms Mellet’s suffering was aggravated by the obstacles she faced in getting information about the appropriate medical options.

The UN said the strict rules that support groups in Ireland can provide on information have a chilling effect on healthcare workers.

It said some struggle to distinguish between support for a woman who has decided to terminate a pregnancy and promoting abortion.

In its findings the UN said: “The State party should amend its law on voluntary termination of pregnancy, including if necessary its Constitution, to ensure compliance with the Covenant, including effective, timely and accessible procedures for pregnancy termination in Ireland, and take measures to ensure that healthcare providers are in a position to supply full information on safe abortion services without fearing being subjected to criminal sanctions.”

The State’s laws on abortion derive from the Eighth Amendment to the Constitution which gives an equal righto life to a pregnant woman and her unborn child.

Last year new rules came into effect under the Protection of Life During Pregnancy Act 2013 to allow for abortion when there is a real and substantial risk to a woman’s life — including the threat of suicide. The ban remains, however, on termination in cases of rape, incest, inevitable miscarriage and fatal foetal abnormality.

The Centre for Reproductive Rights, which filed the complaint to the UN committee in November 2013 on Ms Mellet’s behalf, held a press conference in Dublin on Thursday to respond to the findings along with Amnesty International, the Irish Family Planning Association, Termination for Medical Reasons, the National Women’s Council of Ireland and the Repeal the Eighth coalition.

Leah Hoctor, regional director for Europe at the Centre for Reproductive Rights said the decision was “profoundly important” for Ms Mellet but also “groundbreaking” in international law.

“The committee has vindicated Amanda’s claim that she should have been entitled to receive abortion services in this country under the care of her own doctors and her own nurses. And it has recognised that by maintaining a legal system that forces her to travel to another country to obtain these health services, the Irish State inflicted serious harm and serious wrongdoing on her.”

The decision marked the first time ever that, in dealing with an individual complaint on behalf of an individual woman, any international human rights court or committee had found that by criminalising abortion a state had violated its international legal obligations to respect and to guarantee a woman’s human rights, she added.

Ms Hoctor said the committee would continue to scrutinise Ireland’s adherence to the decision until the the committee deemed it had been complied with.

“As a result, the Government must move swiftly to put in place a serious and effective process to change its laws so as to ensure that the kind of human rights violations that Amanda Mellet suffered can no longer continue to occur to other women living in this country.”

Ms Hoctor said she hoped the Government would now begin “in good faith” negotiations on what amount of compensation it would pay Ms Mellet and on how it would make available to her the health services, psychological treatment and counselling that she had indicated she wished to undergo.

“If the Government does not make contact with us then we will be making formal written contact with senior members of government and requesting a course of dialogue with them.”

In a statement after the ruling, Ms Mellet said it was her “sincere hope” that it may assist the Government in “finding the courage to make necessary changes in law.

“I hope the day will soon come when women in Ireland will be able to access the health services they need in our own country, where we can be with our loved ones, with our own medical team, and where we have our own familiar bed to go home and cry in. Subjecting women to so much additional pain and trauma simply must not continue.”

Ms Mellet said that with the decision in hand she now wished to finally leave behind the painful memories and she asked the media to respect her wish for privacy for herself and her husband James, who had been with her “every step of the way”.

The Human Rights Committee is an independent expert body established to oversee state parties’ compliance with the International Covenant on Civil and Political Rights. It is composed of 18 members who are elected by states that have ratified the covenant, including Ireland, and who serve in their personal capacity.

Some 169 states have ratified the covenant. A total of 116 states, including Ireland, have signed an optional protocol which obliges them to accept binding legal obligations to protect and guarantee human rights.

Man (50s) killed in single vehicle crash in north Co Dublin 16:59
No plan for legislation to close meat plants in cases of Covid-19 outbreaks 16:57
Accused claimed ‘I know what it’s like to be a murderer’, trial told 16:08
Bus Éireann to shut many inter-city routes due to financial pressures 16:00
Northern Ireland reports 220 new cases of Covid-19 14:54