The healthy way to do your supermarket shop 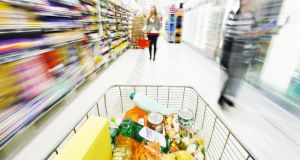 Few of us enjoy supermarket shopping but it’s something that has to be done. I love the notion of shopping the way the French do, seasonally, in markets and little artisan shops where they greet you by name. The Irish grocery shopping scene is dominated by supermarkets, with many of the small specialist shops having suffered during the downturn. However, it’s heartening to see some new ones emerging.

Portlaoise has a weekly Friday morning market in what’s known as The Top Square, and I like to pick up fresh fish and other goodies there. During the week, we make several supermarket visits, often finding ourselves short on inspiration. So when the chance came to join Janis Morrissey, dietitian at the Irish Heart Foundation, as she gave a tour of Super Valu in Lyster Square, I was there, basket at the ready.

Among Janis’s key messages was the value of shopping in season and eating a variety of colours. We can all get stuck in a shopping rut without stopping to think about seasonal produce and varying the hues on our plates. She suggested including a vitamin C-rich fruit in our daily diet, something we do with orange juice. Topping breakfast cereal with berries can be an easy way of getting our five-a-day intake of fresh fruit and vegetables, she said.

As a vegetarian, the meat counter wasn’t my favourite stop but here Janis stressed the need for very small portions of nutritious meat, poultry, fish and alternatives. Lean cuts and lean mince should be eaten no more than three times a week, she said. Processed meats like bacon, ham, and sausages can be high in fat and salt, she pointed out. Cutting off excess fat and using healthy cooking methods was recommended.

Chicken and turkey should be served without the skin, Janis said. One serving should be 50 to 75g and the average chicken breast is about 100g so that’s your two servings needed for the day. Janis recommended eating fish twice weekly, one of which should be oily, to reduce the risk of cardiovascular disease. Recently I’ve been buying more salmon, mackerel and tuna and it’s gone down well with the hubbie and the 15 year-old but the 11 year-old still prefers meat. Janis suggested I increase my intake of pulses such as beans, lentils and chickpeas, as well as nuts which are a source of protein, fibre and good fats.

As we moved onto the bakery - one of my favourite departments in a supermarket - Janis explained that it’s what we add to bread that increases the fat content. I’ve been trying to buy more wholegrain and seedy options for its high fibre content recently and have been including them in lunch boxes.

The deli section was busy as we dropped by. Here Janis’s observation was that deli meats are generally higher in calories fat and salt than fresh meats. The best choices, she said, are lean cuts of meat; roast turkey or chicken; vegetable and fruit salads; oil-based pasta or potato salads and hummus which I love. Janis advised cutting back on salami, hot dogs, sausage; pepperoni; and fried chicken; chicken wings - all of which the boys like.

At the dairy section, Janis said that soya milk and yoghurts can be a good alternative to mainstream offerings as they don’t contain animal fat. She recommended going for the calcium fortified versions. Cream is a high saturated fat food so should only be used occasionally, said Janis as I made a mental note to avoid it with my favourite treat - apple or rhubarb tart. Low fat custard, creme fraiche or fromage frais are healthier options.

We must admit to using butter, albeit in small amounts, which Janis said should be confined to special occasions because of its high saturated and fat content. Liquid vegetable oil should be the first ingredient in spreads, Janis said.

I also have to acknowledge that ready meals sometimes find their way into our trolley, mainly of the vegetarian variety. Ready meals can be high in fat and calories and very high in salt, was the message. Quick, easy and healthy alternatives, Janis said, include beans on toast, scrambled egg, couscous and stiryfry, something I often make. Rapeseed; olive, canola; sunflower or corn oil were among the oils recommended.

Homemade tomato sauces with lots of vegetables are best with pasta, Janis said. She advised checking soup and sauce labels as they can be high in fat and salt.

Janis’ general tips for successful and healthy shopping include: making a list; avoiding shopping with hunger pangs; using the food pyramid as a guide; buying fresh where possible and only buying “deal “ and “bargains” if you need them. It really annoys me the way a certain discount retailer asks you if you’re interested in certain treats as you pay for your items, and sells batches of fizzy drinks at super cheap prices. The sad reality, we reflected is that sometimes it costs more to eat healthily, but what price our health?