‘Walking is really bad ... I have to use crutches to help hold me up as I get exhausted’ 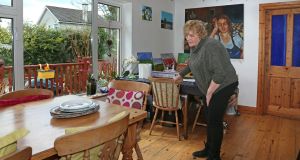 Marie Cunningham, who has scoliosis, holds on to a chair for support in her home in Galway. Photograph: Joe O’Shaughnessy

Maire Cunningham is 58 but says she “feels like 90” due to the pain caused by the curvature of her spine.

“Walking is really bad as I am so bent over and I have to use crutches to help hold me up as I get exhausted,” she says. “I can only stand sit or walk for a short time again due to the pain building up.”

Most of the focus on scoliosis waiting lists in recent years has been on children, but throughout the country there are also adults awaiting treatment or even to see a consultant.

Cunningham is one and, as with children suffering a delay in treatment, her condition is deteriorating while she remains on the waiting list at University Hospital Galway.

In 2010, Cunningham had rods inserted in her back to correct the scoliosis, but her symptoms persisted.

“Shortly after the surgery, I complained that I felt the muscles in back were in spasm and pulling me forward,” she says. “I was told it was muscle fatigue, but it got worse. I was told to use crutches, received physiotherapy, did exercises and swimming – no help.”

Last year she was diagnosed with flat back syndrome and told that no amount of exercise would change the position of her spine because it was fused. Further surgery is required to remove the rods and take wedges of bone from her spine. New, curved rods will then be inserted in a complex, risky procedure.

“They want me to wait, but as far as I am concerned I have I gone through enough pain, disability, mental depression in the past five years,” she says.

“As a result of this, I cry every day out of pain and frustration at not being able to walk, and I am getting very depressed. My family, God love them, bear the brunt of this because I get so bad-tempered with the pain, or they hear screaming and crying when the spasms in my back and legs get so bad I can’t move to relieve them.”

Cunningham has written to the Ombudsman and acting Taoiseach Enda Kenny about her plight, and local radio station Galway Bay FM has attempted to highlight it, but to no avail.

The HSE suggested Cunningham get the operation abroad, with the cost later reimbursed, but she said she cannot afford the upfront payment.

The HSE figures appear to show there are just six patients on the scoliosis waiting list in Galway, but Cunningham maintains she has been “told differently” and says she no longer trust official reassurances.

She recognises that surgery carries its own risks, but says nothing else offers the promise of relief from the pain.

“I need a definite date when I can go in and have the operation and get my life back, as soon as possible.”

1 Donald Trump’s political success is based on racism
2 ‘White Irish people have never had to think about this’
3 Tyrone midwife on the cover of Vogue magazine
4 Steady drop in number of Covid-19 patients in Irish hospitals, new HSE figures show
5 Sports bodies must keep electronic records of participants as training sessions resume
Real news has value SUBSCRIBE