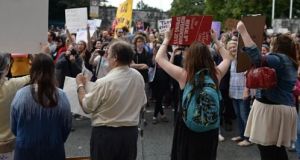 Protesters for and against abortion rally in Dublin earlier this year. File photograph: Getty Images

More than 5,600 women in Ireland tried to buy abortion pills online over a five-year period using a leading web supplier based in the Netherlands, according to a new study.

The sale of prescription only medicines by mail order is prohibited in Ireland, including supply via the internet.

Follow-up data indicates a high level of satisfaction with the service, with 94 per cent of those who completed a consultation form saying they were “grateful” for the option of obtaining a medical abortion online, according to the study published in the British Journal of Obstetrics and Gynaecology.

Almost 2 per cent of the women surveyed gave rape as the reason for availing of the service. The main reasons given were contraception being used incorrectly or not working (54 per cent) and a failure to use contraception (44 per cent).

Some 79 per cent of the women were under seven weeks pregnant, and the rest were between seven and nine weeks. The service is not available beyond nine weeks.

Just over one-third of the women had no children, while the rest had families of varying sizes. Less than 5 per cent were under the age of 20.

The vast majority of respondents said an at-home medical termination of pregnancy was the right choice for them, and would recommend the service to others. Seventy per cent said they had felt “relieved” afterwards; 17 per cent said they felt “guilty”.

Under the system operated by WoW, a doctor provides a prescription for a woman and the abortion-inducing drugs, mifepristone and misoprostol, are dispatched by a separate organisation. Shipments to Ireland are sent in the first place to a Northern Irish address. An online helpdesk provides post-abortion follow-up.

The authors, from US and Scottish universities, said women characterised the ability to choose at-home medical termination as an essential service in the context of their personal circumstances.

The experiences of women with few economic resources suggested a “grave inequity” in their ability to access a termination, they added. “Women noted their inability to afford travel abroad, to take time away from children and work, to arrange travel without their families’ knowledge, or to travel at all due to migrant status.”

Women also spoke about the stigma attached to pregnancy in some social circumstances, the stigma surrounding termination and the “psychological suffering caused by having no option but to continue a pregnancy they did not want or feel they could continue”.