Less to Varadkar medical card moves than meets the eye

Message from review group report is: if system isn’t broke, don’t fix it 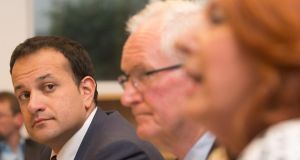 There is less to Leo Varadkar’s “10 actions” to improve the operation of the medical card system than meets the eye. Arguably, this is as it should be.

First, the existing system of awarding medical cards on the basis of financial eligibility remains firmly in place. In the words of the expert review group report from Prof Frank Keane, it is “not without its merits for the great majority”.

Even the much-criticised system for awarding cards to people over the income threshold on a discretionary basis works “to a certain level”, according to the report.

So the message from this report is: if the system ain’t broke don’t fix it.

A separate report from consultants Prospectus makes the similar point the current process has “many positives”, but “this message is not effectively communicated”.

That’s why the Minister’s approach is concentrated on the 5 per cent of cases where issues have arisen. There are some sensible proposals, such as introducing a standard application process for all types of medical cards, the drug payment scheme and the long-term illness scheme.

Reintroducing more local health office involvement in decisions is a U-turn but makes sense as long as there is a level of uniformity. Under the old system, before centralised processing was introduced, applicants in some areas were up to 13 times more likely to be given a discretionary card than in other areas.

can down road The details of many of the actions have yet to be finalised. Setting up a clinical advisory group to provide guidance on applications involving significant medical conditions is an exercise in kicking the can down the road, particularly when Prof Keane’s group struggled so much to fit the square peg of medical conditions into the round hole of the medical card scheme.

In a similar vein, the Department of Health and the Health Service Executive will “consider” the best way to provide medical aids and appliances to people, and services to children with severe disabilities. The Keane report recommendation to give cards to children on an individual basis rather than to the whole family has also been put on the long finger.

The promised “enhanced” system will take into account “the burden of an illness”, but how is this to be assessed? Prof Keane suggested this might be a very difficult process, though not impossible. The Minister said it might need legislation.

The medical card controversy might never have happened had the Cabinet not demanded “probity” savings from the HSE in 2013 and had Varadkar been honest enough to express regret over his involvement in that decision.