Irish poultry farmers urged to be vigilant over bird flu 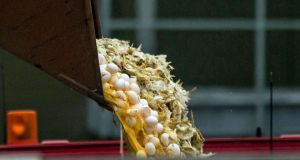 Minister for Agriculture, Simon Coveney has moved to reassure the public that there is a plan in place for combatting bird flu. Above, a digger is used to dump eggs and chickens at a poultry farm where a highly contagious strain of bird flu was found by Dutch authorities. Photograph: Marco De Swart/Reuters

Minister for Agriculture Simon Coveney has moved to reasssure the public that contingency plans are in place, should an outbreak of bird flu occur. This follows the discovery of bird flu on a duck-breeding farm in east Yorkshire and on a poultry farm in the Netherlands. An outbreak was also confirmed in Germany earlier this month.

Mr Coveney said his department had “a full range of contingency plans in place and, should an outbreak occur measures will be initiated immediately, to prevent the spread of the disease”.

He noted that H5N8 was the causative agent in Germany and the Netherlands and while the strain had not been yet confirmed in the UK outbreak, it had been confirmed as highly pathogenic.

“There is no known food safety risk associated with the strain of the disease (H5N8) confirmed in Germany and the Netherlands,” Mr Coveney said.

The H5N8 strain has never been detected in humans, according to the European Center for Disease Control and Prevention in Stockholm, but has been reported in birds in South Korea, China and Japan.

In Britain, the Department for Environment, Food and Rural Affairs said the outbreak was not caused by the lethal H5N1 strain and “there is no risk to the food chain” .

Avian influenza is a notifiable disease so farmers must inform their vet and the Department of Agriculture of any unusual increase in bird deaths, or any suspicion of the disease.

Commercial poultry farms are already highly security-conscious because of the speed at which disease can spread through poultry houses but farmers have been urged to step up those bio-security measures. Mr Coveney said farmers must follow the bio-security advice issued by his department and available at agriculture.gov.ie.

Advice includes ensuring fencing is secure with lockable gates and all poultry houses are bird and rodent-proof. Mr Coveney said wild migratory birds were the likely source of the outbreak of the disease in Europe but this had not been confirmed.

Farmers are also urged to keep tight control over visitors to the farm. Footbaths containing approved disinfectant should be provided and only essential vehicles that have been cleaned and disinfected should be allowed onto the site.

IFA national poultry chairman Nigel Renaghan also called on farmers and processors to step up their bio-security measures in the wake of the confirmed outbreaks.

An outbreak of bird flu was confirmed in west Cork more than two years ago, but it was not the deadly strain that threatened human health. The virus was found in a flock of pheasants at a Clonakilty gun club and the infected game birds were slaughtered while tests were carried out. Tests from a local poultry farm were negative for avian influenza.